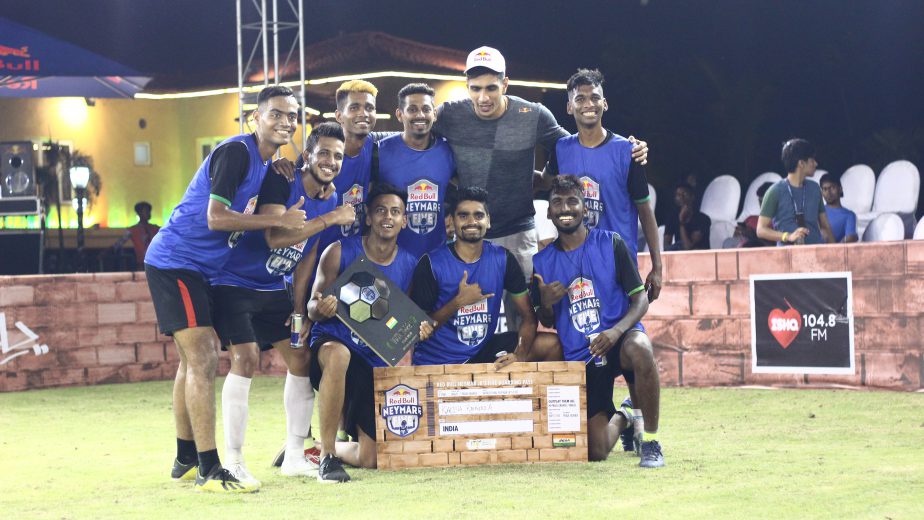 A Footballing carnival hosted by the city of Kolkata often regarded as Mecca of Indian Football involved some exhilarating footballing action, live music, a familiar national footballer in presence and a Mumbai based side’s 3rd attempt to outplay them all.

Kolkata, known for his historic footballing legacy, were in witness of some exhilarating footballing action as they hosted the National Finals of Red Bull Neymar Jr’s Five (India). Eighteen teams from across the country participated in the India finals on 17th April held in a picturesque location at Café Ekante, Eco Park, Eco Island, New Town, Kolkata.

Some high tempo football action on pitch, live music on the background and a highly energetic crowd gelled well together to create a festive atmosphere.

After falling at the final hurdle for the last two years, Kalina Rangers finally broke the jinx to lift the trophy this year and book their ticket to the Samba land. After a dominating performance in the league round, Kalina Ranger’s nerves came in for the real test in Knockout stage, where in quarterfinals and semi finals was decided via 1vs1 tie breakers before the final encounter against Team Underdogs.

In the final, Kalina Rangers A faced Team Underdogs, who were one of the two 2nd second best side to make it through to the knock out rounds. The team from Aizawl surprised everyone with some stellar and strategic game play as they outclassed Pune representative Kalina Rangers (B) in quarter final before knocking out Boom Boom FC in the semi-final round.

In the title deciding encounter, Kalina Rangers A came out all guns blazing with continuous attack throughout the game and their hard work finally bore fruit,  when Tyson Pereira’s strike found the net and turned out to be the only goal of the game.

Red Bull athlete Gurpreet Singh Sandhu – Indian National team first choice Goalkeeper, was present at the National Finals, sharing his insights with the participants before witnessing the whole final game from the sidelines.

“Red Bull Neymar Jr’s Five 2019 has become a global tournament and it helps in giving wings to young footballers a chance to represent their nation at the global stage. I am delighted to know that energy drink giant Red Bull are investing in Indian football and giving an opportunity to young Indian footballers to play the beautiful game. I would like to congratulate Kalina Rangers for winning the national finals and wish them all the best for the World Finals in Brazil,” said Gurpreet Singh Sandhu.

For full Gurpreet Singh Sandhu Interview: It’s more about having that sporting culture in our country

For details of fixtures, scores and standings visit here –>Results, News and Standings

Punjab face Goa, services take on Karnataka in 2018-19 Hero Santosh trophy Semi-finals
KSA and U Mumba settles for a point