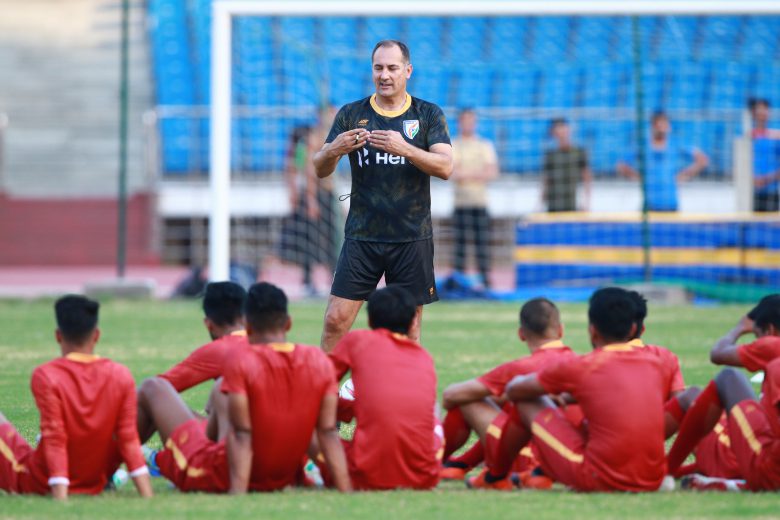 The Indian Senior National Team players, who assembled in Mumbai on Monday (June 24) for the preparatory camp for the forthcoming Hero Intercontinental Cup reflected that their daily routine in the 14-day break included “regular sessions to improve their fitness, and ball play”.

“Coach Stimac and his support staff had drawn up a schedule for every individual player,” defender Pritam Kotal informed. “It was a kind of an off-season, but we had to deal it as a kind of pre-season for the camp.” Central defender Sandesh Jhingan maintained the “bonus” stayed the fact that “the schedule came from the ‘Professor’ (Luka Radman)”.

“Professor was very categorical. He highlighted what a player needed to do when he is away from his Club, and National team set-up,” Jhingan explained. “Now everyone will come back fitter. The Coach can work on technical aspects, and on the system, on how we want to play.”

The Blue Tigers will be camping in Mumbai before proceeding to Ahmedabad for the Hero Intercontinental Cup which kicks-off on July 7 at the EKA Arena. India play Tajikistan on the opening day, with DPR Korea, and Syria being the other two teams.

Goalkeeper Gurpreet Singh Sandhu admitted, “I did see my family, but haven’t taken a break after the King’s Cup. I have been working day in day out to stay fitter,” he smiled. “The camp will be a different one. All are fresh, and ready to carry on the momentum of learning the new system, and implement it on the pitch.”

Was it a bit tough, especially with not being able to devote much time for the family? “Not at all,” Pritam quipped back. “I enjoyed the break, spent quality time with my family, stayed with them. But I never compromised on my fitness schedule. In fact, I did more. The awareness levels were higher.”

Jhingan nodded, “If you are on the path of trying to be the best version of yourself, and if you are in the path of fulfilling your full potential, or going beyond, you can’t take the liberty of taking too much rests,” he explained.

“Apart from the physical and technical training schedule, we were also provided match analysis videos by the coach. Emphasis was paid on the quintessential mental part. If you are mentally strong, and understand football, it’s your biggest strength as a player.

“We had a decent campaign in the King’s Cup. We were able to play a certain extent of the football we wanted to play,” he added. “It’s all about how we adapt to the system. We need to play with more confidence, and courage. We are in a building process for the World Cup Qualifiers in our quest to become a complete team. There’s no room for compromise.”

Midfielder Anirudh Thapa, nevertheless, was in the thick of the action honouring his club’s commitments in the AFC Cup. “I’ve been fulfilling my duties on the field. Not having an off-season has helped. I’ve been training every day, and it’s helped me maintain a fitter physique,” he expressed. “I’m looking forward to spending more time with the coach and learn more about his strategies, and style which he has in mind for us.”