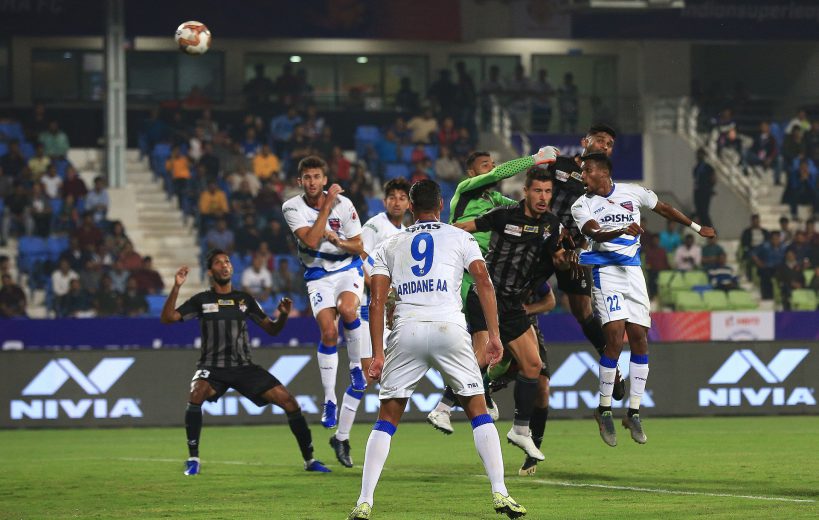 ATK and Odisha FC played out a goalless draw in a Hero Indian Super League clash at the Shree Shiv Chhatrapati Sports Complex here on Sunday.

Both sides carved out numerous chances to break the deadlock but a goal would not materialise. The result sees ATK maintain their spot atop the table with 10 points from five games while Odisha are now fifth with five points from as many matches.

The game got off to an energetic start with ATK looking to go forward quickly. However, Odisha pressed their opponents hard and forced a couple of mispasses.

Odisha slowly started to put ATK’s defence under pressure and had two chances to take the lead after 15 minutes. Nandhakumar Sekar headed over from close range after Martin Guedes’ corner evaded ATK custodian Arindam Bhattacharja. Then, Daniel Lalhlimpuia displayed silky skills to embark on a mazy run, evading three ATK defenders with ease, but he lost his footing and could only direct a tame effort at Arindam.

Odisha’s dominance continued as Nandhakumar picked out Guedes in the box, but he could not get a shot away in the 24th minute. In the middle of all the Odisha pressure, ATK had a chance when Javier Hernandez was sent through on goal, but Odisha goalkeeper Arshdeep Singh was quick to pounce on the ball. Odisha continued to be in the ascendancy with Shubham Sarangi and Nandhakumar Sekar asking quite a few questions of the ATK defence.

The frantic nature of the game continued even in the second half. Odisha continued to assert their dominance and Martin Guedes saw a shot in the 52nd minute saved by Arindam. At the other end, ATK started to slowly claw their way back into the game and had a great chance when second-half substitute Jobby Justin got on the end of a corner and got a header on target in the 63rd minute. Nandhakumar, however, was on hand to clear the ball off the line.

Jerry Mawihmingthanga then picked out Aridane Santana at the far post but could not get his header on target as ATK heaved a sigh of relief. Both sides continued to test each other in a bid to find a winner but a combination of sloppy passing and poor finishing kept the deadlock intact.

There was some drama at the end as ATK forced a series of corners but a goal would not come to fruition.