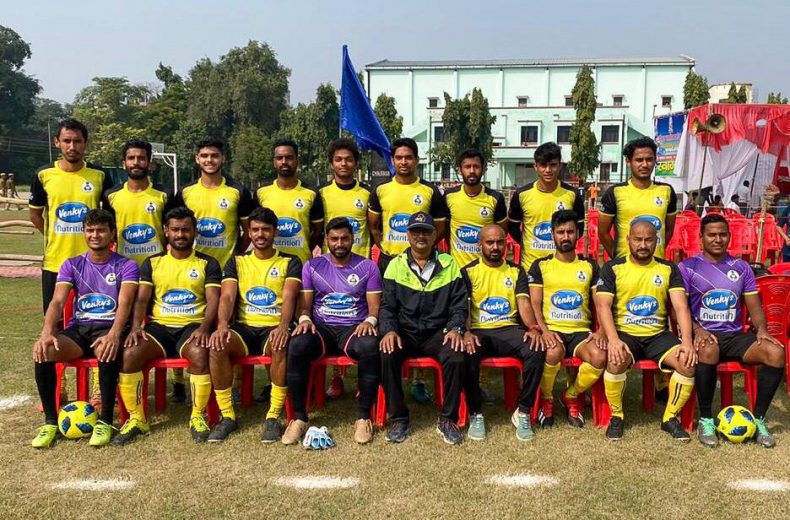 Mumbai Customs took part in an All India Football Tournament held at Mau, Uttar Pradesh where they emerged as the Champions. The outfit is also the defending Champions of the MDFA Elite Division 2018-19 Season.

In the eastern part of Uttar Pradesh, where the Saree Industry is very popular, the game of football grabs the attention of noteworthy people. Specifically, in Mau, a small town in UP, football is an important part of life. Here, irrespective of age, people are often seen showing a keen interest in the game. The aforementioned is justified analysing the All India Tournament held in Dr Bhim Ambedkar Rao stadium the previous week, which was a roaring success. It was nothing less than a festivity as people travelled 50-60kms to watch the participating teams.

The tournament started on Monday, 4th of November and hosted twelve elite teams from all over the country. District Magistrate Gyan Prakash Tripathi graced the event and inaugurated the tournament.

Mumbai Customs won the competition beating the likes of Gokulam Kerala FC, Sahara Stars, UP State Team and CAG Delhi. During the RO16, Mumbai Customs romped to a 2-0 victory against Sahara Stars where Praneel and Marc found the net. As they proceeded to the Quarter Finals, Customs faced the mighty Gokulam Kerala FC bagging a decisive 1-0 victory in which Gokulam conceded from an own goal. In the Semis, team Mumbai Customs clinched a dominant victory against the local UP State Team thumping 3 goals where Marc, Rinaldo and Rohan scored.

It was Sunday, 10th of November when the finals took place. A jam-packed Dr Bhim Ambedkar Rao Stadium hosted a top-notch team from the capital who locked horns against the defending champions of the Mumbai District Elite Division.

The game commenced showcasing the old rivalry between the National Capital and the Financial Capital of the nation. It was an end to end affair where both the teams headed to the tunnel with the scoreboard displaying a goalless draw until the first half. Soon when the second half began, Mumbai Customs broke the deadlock. At the 55th minute, the talisman and the top scorer of the team, Marc D’Souza did what he does the best. He netted his 3rd goal of the tournament and gave Mumbai Customs the much-needed lead. However, the team failed to maintain the momentum and eventually conceded a penalty in which the opponents made no mistake.

The final score read 1-1 and the game went to the penalties. Liyaz Koya, the goalkeeper of Mumbai Customs, who is renowned for his heroics in the 2018-19 MDFA Finals against Air India rose to the occasion to lead his team to a consecutive victory. The game went to the sudden death where Liyaz saved the final strike and Rinaldo ensured a goal on the 8th kick to take home the coveted trophy.

History repeated itself as Liyaz and co. led Mumbai Customs to a consecutive title victory! Asking about the formula Liyaz has for handling such tense situations, “It’s not that my sole effort led my team to this victory. I have always believed that football is a team game and I played my role. Regarding consistency, I believe that my maturity and playing experience does the trick” came a methodical reply. He further explained how happy he was with the second win in a row.

The captain of Mumbai Customs, Hekmat Singh praised the organising committee and reiterated how amusing their entire UP tour has been. Commenting on the historic win, “Yes it was nice. Winning the tournament outside Mumbai is a moment to rejoice. The team played as a unit and we got to learn a lot from the tournament. The experience will help us thoroughly in the upcoming MDFA season” quipped Hekmat.

He concluded by stating how important it is for the team to play more tournaments like this. “Playing more tournaments like these helps the team to grow. Doesn’t matter whether it’s in Mumbai or outside. It helps the team to gel together. These exposures are an important part of the team-building process which only happens when everyone is together. Playing for some time now, we all know each other’s positive and negative side. Staying together and playing makes us understand what needs to be done to develop better as a team” claimed Hekmat Singh.