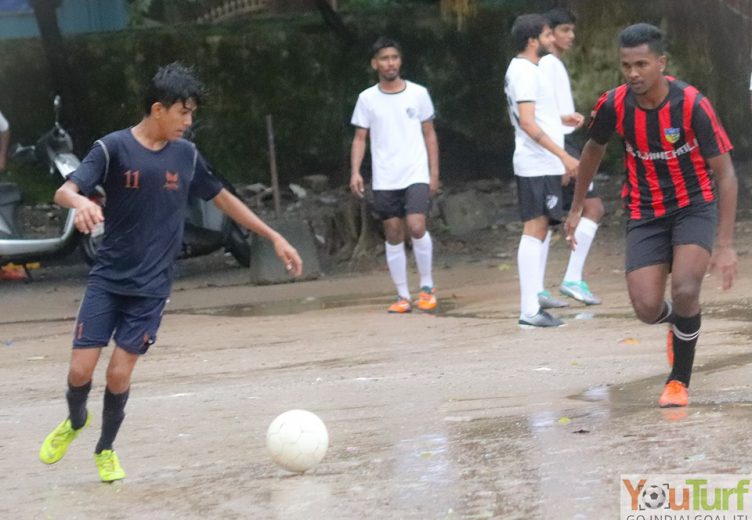 Jagdeep Singh’s stunning first half free-kick turned out to be the winner while in other game, Vipul Gorai FC made short work of Teresarian (B)

KSA Ambitious FA’s dream run in MDFA 3rd division continues after the club picked up its fifth consecutive victory of the season. Needing just 1 point for qualification to next round, Ambitious faced Soccer Club Chincholi. The latter started brightly with a fourth minute counter attacking move almost converted into goal only for Ambitious Keeper pulling off a crucial save.

After the initial nervy movements, Ambitious FA soon settled into the game and started dominating the play. Midway through the first half, Left back Maurish was brought down just outside the box as Referee awarded a free-kick to Ambitious.  Jagdeep Singh stepped up and made no mistake delivering a stunning freekick that beat a diving keeper to find the net.

In the second half, Ambitious continued their attacking streak however got a bit profligate in the box as numerous chances went abegging. Alex despite suffering an injury played the whole game putting in a good shift. Ambitious almost paid for the profligacy when a poor clearance from keeper saw SCC gain back the possession in a dangerous position. However, Jagdeep’s last ditch tackled saved the day as the game ended 1-0.

In the other game, Vipul Gorai FC smashed seven past a hapless Teresarian (B) defence. A goal apiece from Maitreya Patil and Shubh Solanki along with Mhaske’s brace were the highlight of the game but it was Striker Nikhar Jadhav’s first half hat-trick within the space of 9 minutes that stole the show.

Also Read: Joga Bonito out to make their mark with women’s team

Joga Bonito out to make their mark with women’s team
Ashique, Narzary recalled as Igor Stimac names 35 probables for the preparatory camp