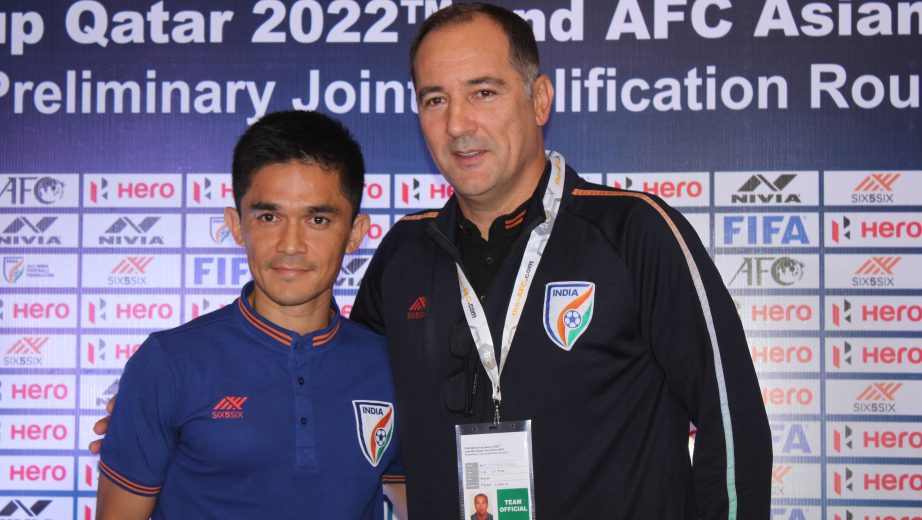 The Indian Senior National Team is set to lock horns against Oman tomorrow (5th September 2019). The Blue Tigers will face Oman in their opening game for the joint qualifying campaign of the FIFA World Cup Qatar 2022, and AFC Asian Cup China 2023 at the Indira Gandhi Athletic Stadium in Guwahati.

During the pre-match press conference, Head Coach Igor Stimac ensured that the team is well prepared to meet the challenge.

“The preparations for the game went well and as a coach, I am happy. This will be our third campaign and I am happy with the improvement in the team in terms of the understanding levels of the players and their fitness levels. We are well concentrated and well prepared,” he said.

Out of the total 10 meetups against the middle-east nation, team India has never clinched a victory. The Blue Tigers have lost 7 matches and settled on equal terms on the other three. The teams faced each other last December in a friendly match where the match ended in a goalless draw. Speaking about the task in hand, gaffer Igor Stimac explained that the outfit will be “strong and organized” on the pitch.

Captain, leader and the legend, Sunil Chhetri said that there is a ”pulse of excitement” in the team with just one day to go for the big game.

“There is a great eagerness in the team and one really feel the pulse of excitement among the boys. We are really looking forward to the game. We had a great training camp and everyone in the team is fit and hungry. The players are gelling well and responding to what the coach expects from them,” Sunil mentioned.

Referring to the 2015 loss against Oman for the 2018 World Cup Qualifiers, where Sunil scored the only goal, he said, “We weren’t great in that game and conceded very early. We lost 2-1 and had a goal chalked off for offside as well. We certainly hope we do well this time around. All the boys are optimistic, especially with a lot of fans expected at the stadium.”

Coach Igor Stimac also stressed on being “wise and concentrated” while playing in such games.

“We respect all opponents and what is important is to have a strong belief in the dressing room. No opponent is unbeatable and we need to be wise and concentrated in our game.” quoted Stimac.

The Indian National Team is currently ranked at 103, whereas Oman is ranked 87 on FIFA rankings.

The match between India and Oman will be telecasted live on Star Sports 3, Star Sports 1 Bangla and Asianet Plus, and streamed online on Hotstar and Jio TV. After facing Oman, team India will travel to Doha for their next match against Qatar on 10th September.

Also Read: We will play to win against Oman: Gurpreet Singh Sandhu