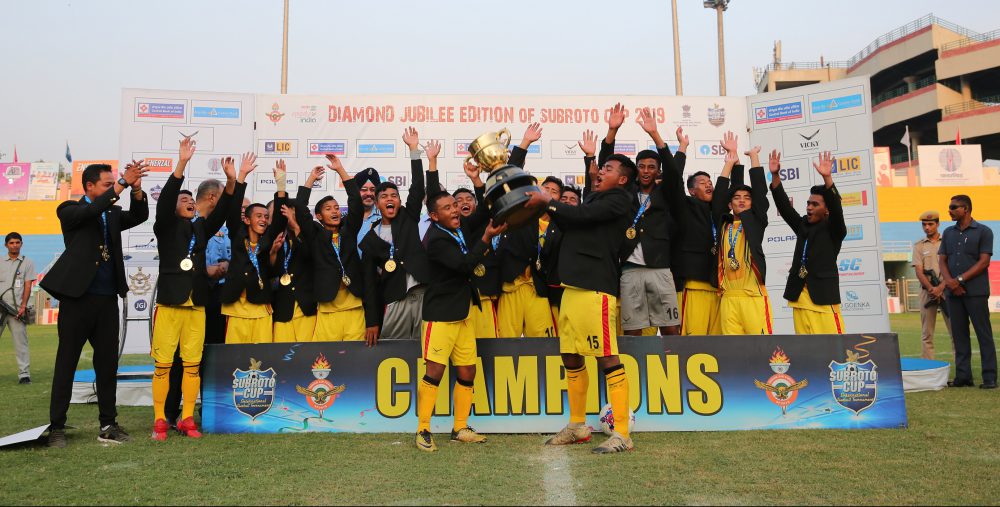 The first half started with both teams looking for an early breakthrough. Hopewel Elias Senior Secondary School, Meghalaya was looking more poised and moved ahead with purpose. Bangladesh Krida Shiksha Protishthan (BKSP) on the other hand was depending on more individual skills during their attacks.

Meghalaya’s counters were looking threatening and in 15th minute an attack from the left flank drew a rash tackle from Hasibul Islam of BKSP as he received the first yellow card of the match. Most of the match was being played in the mid-field as both the teams failed to consolidate on ball possession. Finally the deadlock broke and it was Meghalaya who drew first blood.

In the 32nd minute, Sangti Janai hit a scorcher of a kick from outside the box and straight into the left top corner of the Bangladesh goal. Bangladesh retaliated immediately and a brilliant stop from the Meghalaya goalkeeper, Wanteilang Malngiang denied them the equalizer. The teams went into half-time with Meghalaya leading by a solitary goal.

The second half looked no different as Meghalaya looked the more dominant of the two teams going forward. The frustration was visible amongst the Bangladesh players and eventually it resulted in a rash tackle by Mojibor Rahman. The referee deemed the foul worthy of a red card and he was sent off in the 50th minute, with BKSP being reduced to 10 men. With a man advantage Meghalaya was pressing hard but unfortunately they were not being able to find the back of the net. It was attack after attack from Meghalaya but the only thing that was standing between them and a two goal lead was the Bangladesh goalkeeper, Shakib Al Hasan.

In the end the red card, a goal lead and a very solid Meghalaya defence was too much for BKSP to overcome. Meghalaya finally closed the match and captured the championship by a score of 1-0.

During the presentation, Air Chief BS Dhanoa said, “It’s a momentous occasion for us to be here at the Grand Finale & Closing Ceremony of the Diamond Jubilee Edition of the Subroto Cup International Football Tournament 2019. We, the Indian Air Force strongly believe that sports as a critical factor to usher in human development and this needs no emphasis, as football is undoubtedly the world’s favourite sport and the love for it is similar amongst the air warriors.”

“Therefore, hosting the 60th edition was a matter of pride for us. The number of participating teams from India and abroad have seen a steady rise over the years and that speaks for the popularity of the tournament across the globe. I am happy that the Subroto Cup International Football Tournament this year has seen participation from 09 international teams.  I take this opportunity to congratulate the winning teams and for the others my wishes are that they come back stronger next year to become victorious.”

Individual Awards were as follows: