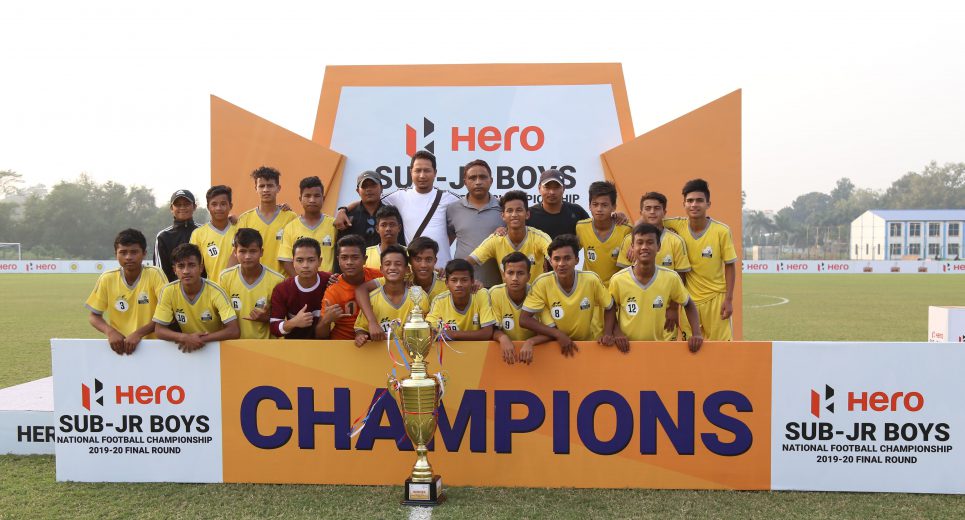 Meghalaya clinched the Hero Sub Junior National Football Championship 2019-20 title, after they beat Arunachal Pradesh by 3-0 in the final played at the Kalyani Stadium in West Bengal today (December 3, 2019).

Incidentally, Arunachal Pradesh lost the final in the penalty shootout to Odisha last season before going down to Meghalaya this time.

Samcharphrang Lato opened the scoring for Meghalaya in the 52nd minute before Samlang Rympei (90’+4′) and Teibok Nongrum (90’+5′) extended the lead in the dying embers to seal the match.

Meghalaya started on the front foot, as the controlled the flow of the game, constantly looking to create opportunities. Their captain Colinsalmon Lyngdoh looked lively upfront, often dropping deep, to help his side gain majority in the middle of the park and create more chances. Arunachal, on the other hand, looked to counter through right-winger Damli Bomnyo, who had their first real chance of the game as he cut in from the right and unleashed a left-footer. However, his shot whizzed past the near post.

Meghalaya had their first real chance of the game around the hour mark when Baniatyllilang Mawkhiew was played through on goal via an aerial through ball. The midfielder tried to outwit the keeper but Arunachal custodian Roshan Thapa got down well to save it.

Arunachal came out with more impetus in the second half, and that opened things up for Meghalaya to break the deadlock. A goalmouth melee gave Samcharphrang Lato the perfect chance to bang it into the back of the net.

Around the hour mark, Jacky Rapung had the perfect opportunity to put Arunachal back in the game as he latched onto a rebound inside the 6-yard-box. However his shot, though from an angle, lacked sting, as Meghalaya keeper Bapynsuklang Mawlong smothered it.

Meghalaya had two good opportunities to seal the win in the closing stages. With around 15 minutes to go, Samlang Rympei rounded the keeper, but his shot was heroically cleared off the line. As the game moved into the last 10 minutes, substitute Wallambok Shangpliang again had an open goal, but his shot was also cleared.

At the death, Samlang Rympei and Teibok Nongrum scored two goals deep in added time which confirmed the fate of the match.