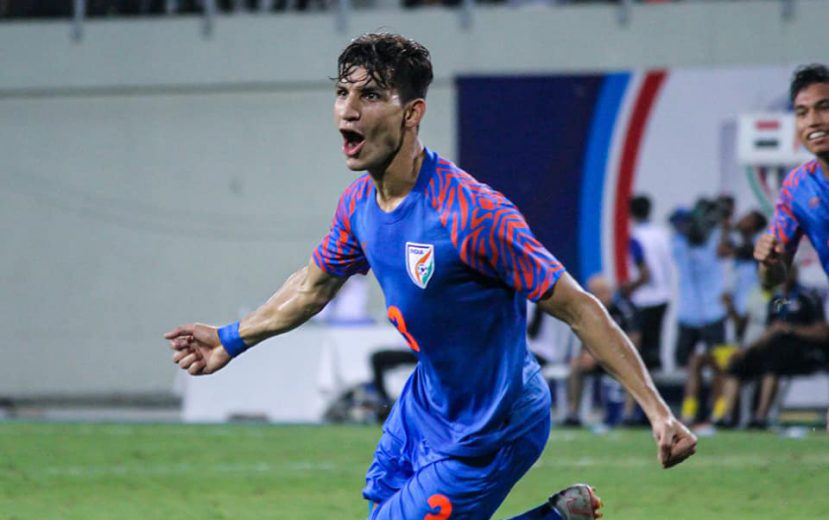 18-year-old Narender Gahlot’s 51st-minute header was cancelled out by Firas Al-Khatib’s 78th-minute penalty kick as both India and Syria shared the spoils of the battle, in a match largely involving end-to-end action where both teams had a number of chances.

The Indian National Team drew 1-1 against Syria in their last match of the 2019 Hero Intercontinental Cup at the EKA Arena in Ahmedabad today (July 16, 2019).

The Blue Tigers started the match on an attacking note and Udanta Singh’s cross as early as the 2nd minute rang the danger bells for the Syrians, but a prying Sunil Chhetri in the box could not do any damage as the opponents survived.

A minute later, Almarmour had a golden opportunity to take the lead for Syria after he went clear onto goal with only Gurpreet Singh Sandhu to beat. The Syrian, however, scooped his shot wide of the net as India survived an early setback.

Chances for India were far from scarce. In the 6th minute, Udanta Singh cut in from the right flank and sent a low cross into the box which went astray, despite Sunil Chhetri, Lallianzuala Chhangte and Abdul Sahal being in the box but being unable to make contact with the delivery.

In the 22nd minute, Pritam Kotal tried to release Udanta Singh once again onto goal but his through ball was a bit too much and ran away for a goal-kick. Gupreet Singh Sadhu was called into action in the 24th minute when a thunderous header from inside the Indian box was plucked easily by him.

Changing over, the Blue Tigers had to wait little for their reward. In the 51st minute, Narender Ghelot, who made his debut in India’s clash against Tajikistan, found the back of the Syria net with a thunderous header connecting off Anirudh Thapa’s corner, to give India the lead.

The goal gave the Blue Tigers much confidence and India started to dominate possession in the middle of the park with Sunil Chhetri and co. jotting down a couple of passes to frustrate the opposition, keeping hold of the ball with much ease.

The Indian defence kept Syria shut in the second half and an inspired performance by Rahul Bheke and goalscorer Narender, coupled with pressure from the midfield suffocated Syria. But Syria were awarded a penalty kick, much against the run of play, in the 78th minute, and Firas made the most out of it, equalising the opponent’s deficit to make the scoreline read 1-1.

Syria tried to breach India’s defence once again but could not as the full-time scoreline read 1-1. With Syria dropping points, DPR Korea advance to the final of the Hero Intercontinental Cup on July 19, 2019 where they will clash against Tajikistan.

Also Read: DSPORT to broadcast LIVE the Round Two Draw for Asian Qualifiers to the FIFA World Cup Qatar 2022