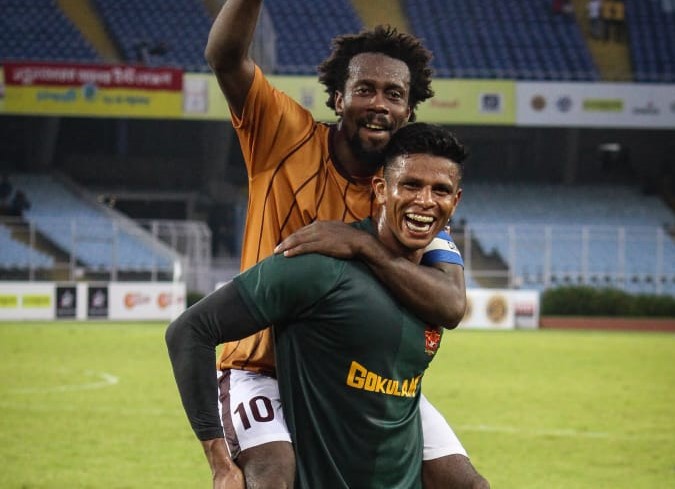 21st August 2019, VYBK Stadium, Kolkata: Yesterday was a doomsday for the Red & Gold Brigade. East Bengal was minutes away from challenging for the 17th addition of the coveted title on 24th this month. Gokulam’s late penalty saw Marcus Joseph equalise and thereon winning the match to qualify for the finals of the prestigious Durand Cup.

The game started seeing East Bengal as the dominant outfit. Crowds came in numbers and painted the gigantic VYBK into Red and Yellow to cheer for their team. The Red & Gold side fielded with an intent to win which was prominent since the start. Within the 3rd minute, Pintu Mahata’s intended cross to Jaime Colado hit the woodwork. The young gun, who previously plied his trade for arch-rivals Mohun Bagan, displayed some beautiful skills and passes but failed to find the net. However, when the clock ticked the 18th mark, Samad Ali Mallick’s long-range effort, deflected slightly by Mohammad Rashid, found the net and broke the deadlock. Gokulam failed to equalise till the first 45 minutes.

After the break, Quess East Bengal was unfortunate enough to suffer a major setback, when their goalscorer and the reliable defender had to be stretchered out due to an injury. A forced substitution at the early moments of the second half and a couple of others changed the course of the match. East Bengal was doing good in terms of defending their solitary goal lead. Although, as the game proceeded towards the dying minutes, East Bengal’s Mehtab Singh made a terrible mistake where he allowed Henry Kisseka to receive a pass inside the box and turn to shoot. Left with no choice, Mehtab deliberately pulled Henry Kisseka down and took away a red card and his team’s fate. Marcus Joseph rose to the occasion and made no mistake from the given opportunity. The match went on to extra time. Gokulam consolidated their attack against a 10-man QEB team. They launched furious attacks on the opposition half which was magnificently kept at bay by the East Bengal shot-stopper, Mirshad. The score remained unchanged and the match proceeded to penalty shootouts.

Lalrindika, the captain of Quess East Bengal, stepped up and missed the first hit. Bruno, on the other hand, stepped up and scored for the Malabarians. Next on the cards was Jaime Colado, the dependable Spaniard and a key player for East Bengal. To everyone’s utter disbelief, his effort was stopped by Ubaid. Meitei of Gokulam Kerala stepped up next, but his effort was saved and Gokulam was restricted from leading after 2 hits. Next up was Marti Crespi who comfortably netted the ball. His Gokulam counterpart Jestin George replied back as he scored from his strike.  Boithang stepped up and kept the hopes of the Red & Gold brigade alive. Lalromawia of Gokulam made no mistake as he scored from the 4th penalty. The 5th and the final lifeline for East Bengal saw Naorem trying to answer, but his effort saw the star performer of the day, Ubaid saving the attempt and clinch a historic victory for Gokulam Kerala FC in the 129th edition of the prestigious Durand Cup.

Thus, Gokulam made an unbelievable come back from being a goal down until 90 minutes. They are now one step behind from the ultimate glory. The Malabarians will lock horns with Mohun Bagan in the grand finale on 24th August, at the VYBK Stadium, Kolkata.