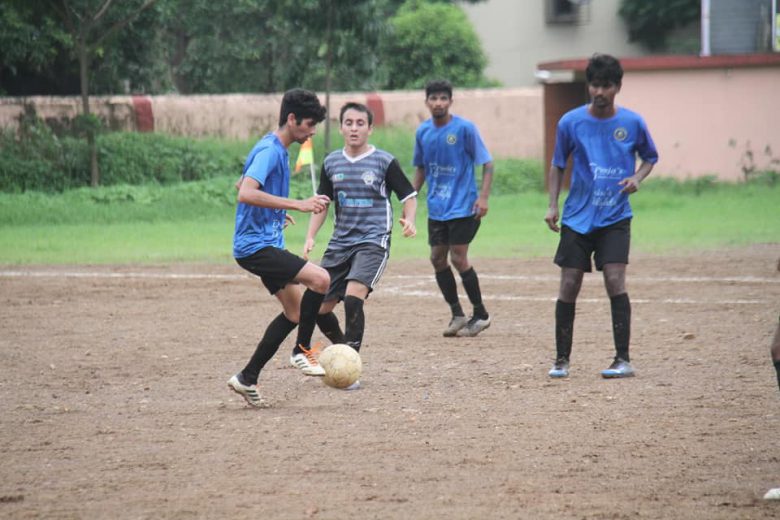 The day began with Myrmidons Sporting vs Challengers FC – the game which was scheduled previous day and got washed out due to incessant rains. With Semi-final spot out of the equation, Myrmidons turned up the heat to register a 7-1 win over Challengers FC. Shivansh Rao, Harsh Dalve, Harsh Rall, Ashutosh Patil and Runal Patil were on target for Myrmidons while Anurag Tavde scored the lone goal for Challengers FC

In the second game of the day, Friends United faced off against Vibrants FC with a latter having an outside chance of making it to semis if they could manage a victory by huge margin. Vibrants FC started off brightly with some slick attacking football; however goals were hard to come by as Friends United defence stood strong. In the 32nd minutes, Paresh Choudhary finally managed to find the breakthrough when his strike found the back of the net.

In the second half, Friends United were off the blocks early as they managed to pull things back on level terms with the 40th minute goal through Prashant Palkar. The game continued with some end to end football; however neither side managed to find the winner as the match ended all square.

Tiger sports came in to their final group game needing just one point to confirm the semi-final spot. With a comfortable 4-1 win, Tiger Sports moved up to the first spot in the group B table, however Milan still has a half game left after their match against ND2 Soccer Starz had to be abandoned mid-way. Pragnesh Solanki and Digvijay Yadav’s individual strike took Tiger Sports to a comfortable 2-0 lead against Gorai FC at break before Niyaz Ahmed made 3-0 mid-way through the second half. Two minutes before full time, Pragnesh completed his brace to put the game to bed before a last minute goal from Mandar Kurlekar for Gorai FC proved too late for revival.

The final group stage encounter of Borivali Premier Football League season 4 between Milan Club – ND2 Soccer Starz had to be stopped midway due to bad lights affecting the game play. The officials then decided to continue the 2nd half of the game on Tuesday with Milan Club leading the proceedings 2-0 when the game was brought to halt at the break. Elton and Sunny Thakur scored the two goals for Milan Club

After U16 trials, FC Dreamers to conduct U14 trials for MDFA Yuva President League
Sara Football Academy to conduct trials for its youth team selections