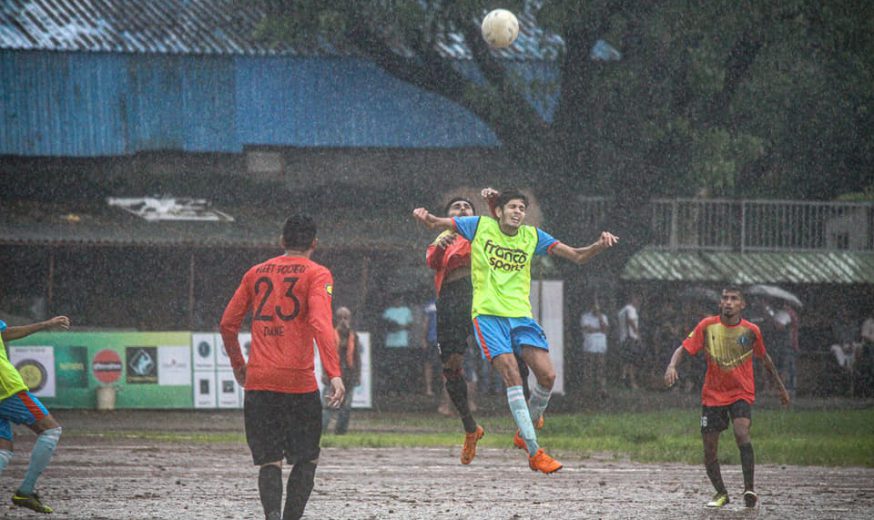 Fleet Footers FC completed their dominant run in group stage with a clinical 7-0 win over Kajupada FC, while in other game, Maryland United thump Shelar FC 9-1

After the opening game between group B sides Challengers FC and Myrmidons Sporting Club was washed out due to excess raining, the 2nd game went ahead as scheduled between Maryland United and Shelar FC

In a one sided affair, Hekmat Singh, Colin, Oniel D’souza starred with goals as Maryland United  romped home thanks to a 9-1 rout of Shelar FC. After a cagey start, Maryland soon picked pace with Shelar FC finding it difficult to contain the opposing attacks. It was Oniel who started off the goal scoring spree when his 8th minute strike found the back of the net. Soon enough, Collin and Calvin added few more as Maryland United looked to finish off the game.

For Shelar FC, Yash Kansara managed to find the back of the net but veteran Hekmat Singh’s late two strikes put the game to bed as Maryland United finished off the group stage comfortably placed at 2nd spot with 9 points and a goal difference of 8

After two close games, defending champions Fleet Footers FC were back to their dominating best as they hammered Kajupada FC 7-0 to maintain their winning streak throughout the tournament so far and top the table with 15 points. Fleet Footers found their feet early into the game as Collins, Dhawal Waghela and Merwyn Fernandes found the net each to make it 3-0 within the first 17 minutes of the game.

After the initial onslaught, Kajupada FC managed to pull the breaks as the game slowed down. In the second half, Umesh Perembra netted the fourth goal of the game as the flood gates for goals opened again. Collin added another to his tally before Grenville Morzello struck twice in three minutes to finish off the game.

Footballcounter would love to hear your thoughts or feedback on your experience and how we can improve? please fill the below google form –  a short survey that will take just 2 minutes of your time. Feedback on Football Counter experience