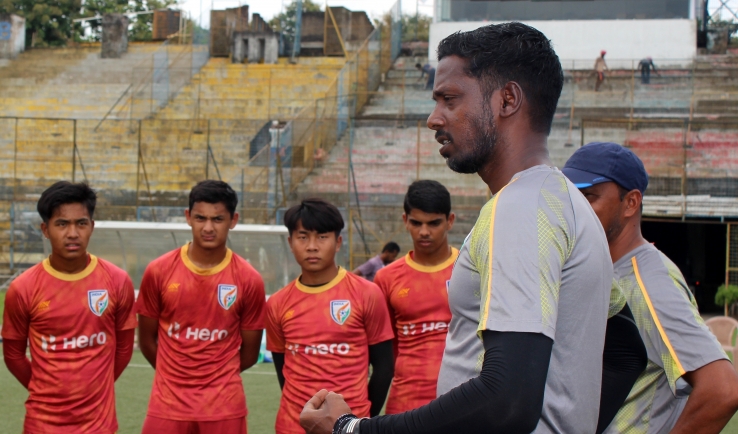 Wonder! The word wonder has been revolving in Indian football for quite some time now. Starting from the senior team to the juniors, the Indian team has proved that they are evolving step by step.

The Bibiano Fernandes led India U-16 football team is prepping to take part in the AFC U-16 Championship Qualifiers. The team is in a wonderful shape having a commendable winning streak of 11 games. Not only are they winning games after games, but the outfit is vanquishing tough oppositions. The U-16 boys beat Turkish heavyweights Fenerbahce SK 6-3 in their previous game.

The happiest part about the upcoming challenge is that the Blue Colts will carry forward the experience and confidence gained from their previous encounters. The AFC U-16 Championship Qualifiers kick off on 18th September at Tashkent, Uzbekistan. India is drawn in Group-B alongside hosts Uzbekistan, Bahrain, and Turkmenistan.

Coach Bibiano Fernandes is optimistic about the team’s preparations and is looking forward to the tournament. “We are happy with how the team’s preparations have gone and we head to the AFC Championship with confidence and a positive mindset. The target is to qualify from the group. As a team, we are mentally ready for the challenge.” affirmed the Head Coach.

However, it takes time for everything. To cook a good dish, you need to have the right ingredients. It was not always that the Blue Colts had such a compact playing XI. In fact, during the initial outings, the results were conflicting to the current form.

The first tournament this young side participated in was the Torneo Del Nazioni, an invitational event in Italy. Out of 5 encounters, Bibiano’s young guns registered a solitary 1-0 win against Buriram U-17. And, a draw against DPR Korea U-16 side. Matches against Thailand U-16, China U-17, and Bangkok Glass U-17 resulted in narrow defeats.

However, with the system Bibiano put the boys into, it was getting noticed that he’s here to make a change. “The Italy trip happened during the early days of our camp. Although it helped to establish the system we wanted to play, the team has undergone a lot of changes since then,” informed Bibiano.

He has completely revamped the squad as it was seen during their commendable outing against Fenerbahce, where the team netted 6 goals past the Turkish giants. Only two players from the 1-0 defeat against Bangkok Glass FC in the Torneo Del Nazioni were on the field during India U-16’s match against the Turk behemoths.

“Over the course with what has been a really good camp, these players have been able to adapt to the system. We have gone from strength to strength,” said Bibiano. These results have made the team learn from their mistakes and develop eventually.

The outcomes have turned over since the team went on their exposure trip to Thailand, where they won all of their four matches, before continuing that run in the SAFF U-15 Championship in Kalyani, winning five more. Finally, the boys made their way to Turkey, where they earned victories in two more friendlies against Keciorengucu FC and Fenerbahce SK. The team will now look forward to their upcoming task in hand – The AFC U-16 Championship Qualifiers!