Asian Champions Qatar held to a goalless draw by the Indian football team! 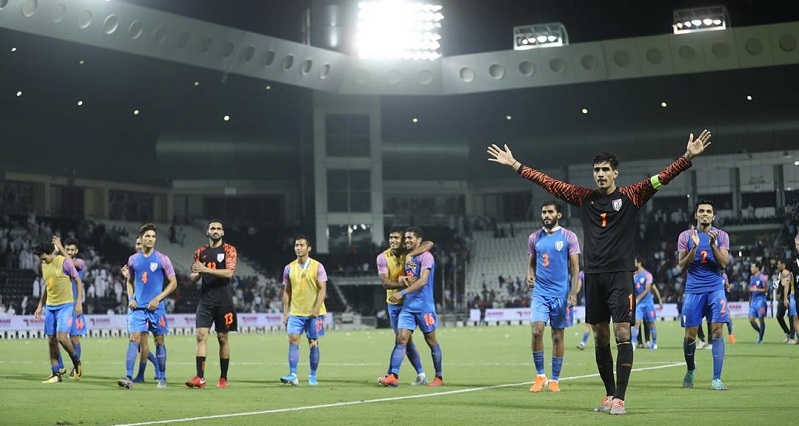 10th August, Doha: India restricted Qatar to a goalless draw in their second outing of the joint qualification for the 2022 FIFA World Cup and the 2023 Asian Cup. The result seemed more like a massive victory for Igor Stimac’s men, which is true in its terms, keeping in mind the absence of the 4 starting XI players.

The biggest set back for the day was the absence of Sunil Chhetri and Aashique. They failed to make it to the team due to illness and injury concerns. Brandon and Subhasish didn’t get a place in the starting XI. Despite the absence of their stalwart leader, the Blue Tigers managed a heartwarming draw against the Asian champions.

The great wall of India, Gurpreet Singh Sandhu, rose to the occasion and went on to make 11 saves for his side. The towering shot-stopper was excellent at keeping Qatar’s attempts at bay where he either grasped the ball or fisted it away. Adil, Jhingan, and Sahal deserve praise alongside the captain. They played a pivotal role in maintaining the balance and keeping the team in shape.

The Indian outfit succumbed to Qatar’s lethal attacking display at the start of the match. They failed to keep up at many times but they somehow made it through to the half time with the scoreboard still reading 0-0.

The second half saw a different approach taken by the men in Blue. It was not until the second half, that the Indian team created an opportunity. Udanta Singh created havoc in the Qatari defense which was dealt with properly. The team opened up with the inclusion of Brandon in the later stages who replaced Nikhil Poojary. Sandesh and Adil kept on maintaining their defensive solidity to ensure the draw. Whenever there were any gaps in the defense, Rahul Bheke and Mandar Rao Dessai filled the positions. Moreover,  the entire team played compact to keep the Qatari players under control.

That being said, the Blue Tigers have created history in yesterday’s outing. The Indian team is the first Asian team in 2019 to manage a clean sheet against the Qatar football team. The likes of Asian heavyweights Japan, South Korea, Iraq, and UAE failed to do so. The only teams to have managed a clean sheet against Qatar this year were Brazil, Colombia, and Argentina. This itself speaks volumes for the achievement the Blue Tigers have achieved.

Courtesy the draw, India moves to one point from two matches with Qatar currently topping the group with four points from the same number of games.

India next plays Bangladesh in their upcoming match on October 15 at the Yuba Bharati Krirangan, in Kolkata.

Also Read: “Won’t Give Up” the emblem for the Blue Tigers ahead of the tough Qatar clash