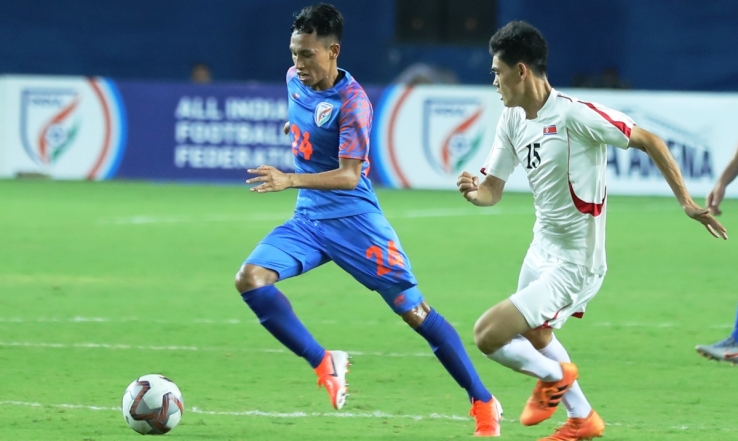 The Indian National team is set to play their toughest fixture in the joint qualification for the 2022 FIFA Qualifiers and the 2023 Asian Cup. The team is up against Qatar, tomorrow, at their backyard. Qatar is renowned as the “Spain” of Asian football. They are a commendable side who recently won the AFC Asian Cup. Furthermore, they thumped Afganisthan 6-0 in their opening match the previous week.

The stalwart captain of the Indian Football team, Sunil Chhetri assured that they will fight till the last minute of the match. On the other hand, he repents the absence of Amarjit Singh, the young midfield general of the Blue Tigers.

Amarjit is down with a major elbow injury and thus failed to make it to the squad. The 18-year-old is endeared for his optimistic and passionate nature. Even Sunil Chhetri is aware of it. “Amarjit is a livewire,” he said. “He is somebody who is so honest. If you tell him that you need to punch the wall for three hours, three hours later, when you come back you will still see him punching it,” Chhetri smiled. “He has been a standout performer in the last 3-4 games for us. I really hope he recovers soon.”

Amarjit firmly believes that his team is capable of putting up a great show against the Asian champions. The young boy from Manipur affirmed that anything can happen in a football pitch and the Indian outfit can do wonders. “In football, it’s all about those 90 minutes. Nothing else matters,” Amarjit, currently under rehab for 6-8 weeks, said. “A year back, did anyone ever think that Qatar would be Asian Champions? But they have overcome powerhouses like Japan, Australia, Iran, and Korea Republic. That was quite unthinkable,”

“We need to be mentally strong, and not get overawed playing them at their home. I repeat, it isn’t easy, but it isn’t impossible either,” he maintained.

It’s this attitude of Amarjit that has been the hallmark of the India U-17 World Cup squad, the Indian Arrows, and the India U-19 National Team at present.

Further hailing Amarjit’s ‘tunnel-vision,’ Chhetri added: “The day he was operated he called up and asked for what food he should have. He said, “my recovery starts now. I need to have the same food the team is having.”

Amarjit smiled. “I have to. It hurts to be out. It’s Qatar tomorrow. There’s no reason why we can’t. It’s about those 90 minutes,” he reiterated.

It seems like this is the new India which the head coach talks about, never willing to die prior to taking the field.

The Blue Tigers will lock horns against the Asian Giants Qatar, at IST 10 pm tomorrow (September 10, 2019).

Also Read: The Indian National Team refocusing before the big match against Qatar