After Senior team debut at 18, Amarjit Singh is just getting started 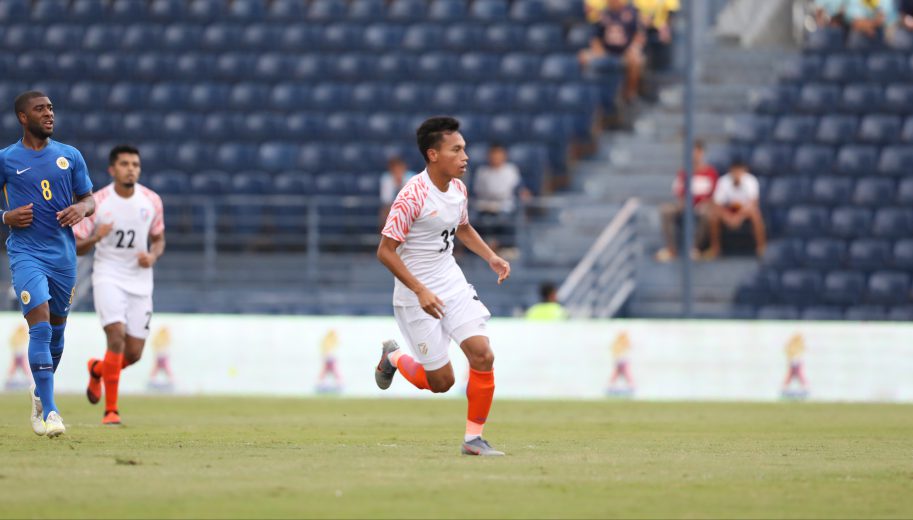 A day after making his debut for the Indian Senior Men’s National Team at just 18, Amarjit Singh Kiyam is in the middle of an interview when Head Coach Igor Stimac puts his arm around him, and says “Amarjit was the man of the match against Curacao — he changed the game!” The Coach pats the youngster, and then walks away.

A bit taken aback by this incredible gesture, the humble youngster just looks at the camera, struggling for words, and says, “I’m just so lucky.”

Amarjit’s rise in the last two years has been nothing short of meteoric — from being the captain of the first Indian Team to take part in a FIFA World Cup, to leading the Indian Arrows in two seasons of the Hero I-League, and now a Senior Team debut! And yet, one can’t help but feel that he is just getting started.

GIVING HOPE FOR A BRIGHT FUTURE

Sharing his thoughts on Amarjit’s abilities, Stimac expressed that seeing him play “gives him hope for the future.”

“I’m really impressed with how he looks on the pitch, and how mature he looks with respect to his age. The way he plays is something which gives us hope. He along with Raynier (Fernandes), completely changed the game against Curacao,” the Croatian stated.

“He is among the players we rely on. All of them have good abilities, and we will work on advancing their game as they are our future.”

‘HE IS OUR LEADER’

His U-19 National Team coach Floyd Pinto, also the Head Coach of Indian Arrows who has nurtured Amarjit all these days just couldn’t hide his pride.

“Amarjit getting the call-up for the Senior National team makes us staff, and players at the India U-19 camp very proud. It’s a wonderful feeling. He is the first player from the Indian U-17 World Cup Team, and the Arrows, and even the U-19 squad to make it to the first team,” Floyd said from Russia where the U-19 National squad is on an exposure tour at the Granatkin Memorial Tournament.

“It gives all the players a renewed hope and belief that their hard work and commitment will not go unnoticed. It’s a motivation for all these players to do better, and work even harder, and hopefully make their way to the senior team in the near future,” he maintained.

“Amarjit getting his senior team debut makes up for his absence in Russia. We miss him. But watching him on screen live makes us so glad. We are all very happy, and proud,” he smiled.

Floyd also highlighted that it’s time for Amarjit to keep up the hard work. “Good luck, and keep working hard, as always,” he expressed. “Stay true to yourself and belief like you always have been. He is our Captain, he is our leader.”

With another box ticked in a career that has just started to spring into life, Amarjit is not getting carried away and has vowed to keep on toiling hard. “Even when I went home after the season, I continued working out in the gym, and on the ground. At this age, it is extremely important to put in the hard yards. The seeds of hard work I sow now will help me in the future and this is the time to focus on my game,” he affirmed.

“There’s a lot to achieve and I’m just getting started,” he smiled.

‘I JUST HAD TO EARN THAT INDIA JERSEY’

The midfielder’s story began in Manipur, where he saw his elder brother Umakanta take to the ‘beautiful game,’ and first got the idea to play for the country one day. “When I started playing as a kid, I had no idea what it means to play for India. I saw my brother, who played at U-16 and U-19 level, and got inspired by him,” Amarjit recalled.

“Manipur has produced many top-level players such as Renedy Singh, Tomba Singh, Gouramangi Singh, amongst others, and I thought to myself that even I can become a part of this list one day, and make the nation proud.”

As and when he was picked for the AIFF Academy, he became a part of the group of players who were meticulously reared for the FIFA U17 World Cup India 2017. Amarjit wore the captain’s armband in all three of India’s group-stage games, and led his team by example as the side captured the imagination of the entire nation.

“I am thankful to the AIFF for the support, and exposure they gave to the Indian U-17 team, which was something unprecedented. They gave us the chance to play against some of the top clubs, and National teams in the world, which helped us improve hugely as players,” Amarjit stated.

The following two seasons saw the Indian Arrows project being revived as they competed in the Hero I-League. The players gained invaluable experience, and notched up six wins in the process in the 2018-19 season.

Opening up about his time with the Arrows, Amarjit said that he turned down the chance to play outside in order to grow “step-by-step.”

“There was an opportunity to play for a big club, but I thought that my development would be better if I stayed with the Arrows. I feel it’s better to grow step-by-step than making a sudden leap. Playing in the Hero I-League was amazing as I got the chance to play regularly against seasoned professionals, and it helped me learn more about reading games and understanding specific situations.”