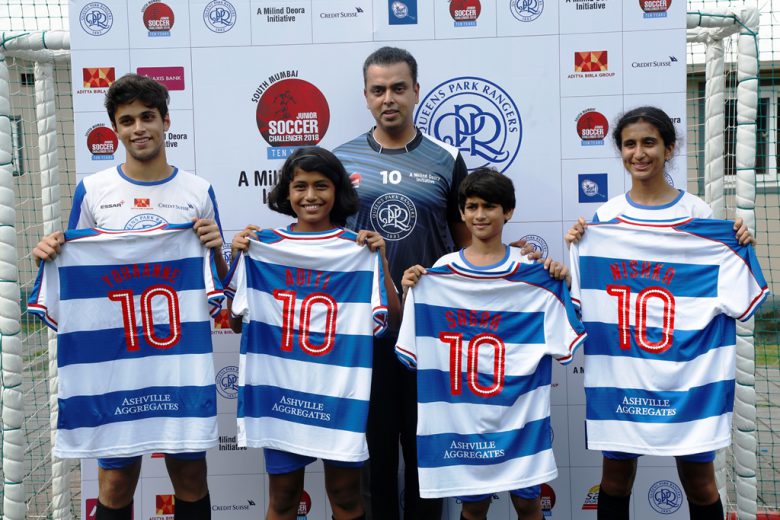 Four talented young players from Mumbai have received an opportunity to train at the London based Queens Park Rangers setup. The selected athletes are two girls and two boys who were successful after a series of talent hunts organised by Milind Deora led Saran Sports. The boys and girls will head to Queens Park Rangers to undergo training at the QPR Academy for a fortnight. The four youngsters were picked based on their overall footballing prowess at a special talent hunt camp of the QPR South Mumbai Junior Soccer Challenger – A Milind Deora initiative, which was conducted back in December 2018.

Mr. Milind Deora has been hosting this event for a decade now.

“I am proud of how far we have come in the past decade. In the last 10 years, I have seen boys growing up to become men. Many have thanked me for keeping the tournament alive so that it may empower thousands more. I am extremely grateful to everyone who has been a part of it, especially QPR and our valued sponsors such as Aditya Birla Group, Axis Bank, Surf  and Credit Suisse,” Deora said at the function

Mr Deora also opined about the increased women participation which has taken place over the years.

“With the participation of girls reaching 30% it is truly remarkable. In the past two years girls, too, have been selected to travel to the QPR Academy, London,” he mentioned

Sixty children were shortlisted for a special talent hunt camp conducted by professional coaches after which four talented youngsters bagged the tickets to London.

This opportunity is going to be a life time experience for the kids to train at the famed QPR Academy which produced English striker Raheem Sterling who shifted as a youngster to Liverpool in 2010 and is currently playing for Manchester City.

Information of the selected candidates

Everyone is waiting for the match against Services: Maharashtra Coach Yusuf Ansari
Samuel Football Academy to host trials for Women’s Football Team, IWL and MDFA