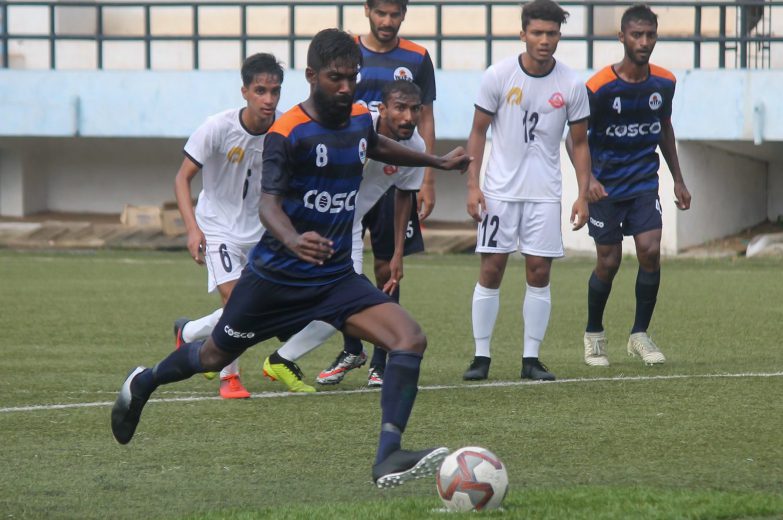 A virtual final on cards as both Maharashtra and Services face each other tied on nine points after 3 games. The winner of the fixtures will qualify for the final round of Santosh Trophy 2019-20.

In the early morning encounter, a brace from Kamran late in the 2nd half gave Maharashtra a crucial victory over a robust Gujarat side. The game began with Maharashtra starting off fiercely winning an early penalty after Aman Gaikwad was brought down inside the box. Yash Mhatre stepped up for the spot-kick only to miss the opportunity as Gujarat held on. To make matter worse for Maharashtra, Gujarat took the lead through Skipper Pavan delicate finish in a well set counter-attacking move.

Maharashtra continued their attacking intent with Aman troubling defenders often; he was once again brought down inside the box minutes after the half hour mark. This time Shannon stepped up for the spot-kick placing it wide to equalize the score line. Both sides entered the break with the scores level.

In the second half, Gujarat looked comfortable on defence keeping Maharashtra’s attack bay for most part. However, Substitute Kamran Ansari stepped up to bail Maharashtra out of the tricky situation. Around the 72nd minute, a corner from Dion was blocked away by the Gujarat defence but only as far as Niyaz, whose chipped attempt came off the bar. The ball fell to Advait Shinde who struck it across the goal where a sliding Kamran snuck the ball into the goal.

Ten minutes later, Maharashtra doubled the lead; a through ball from Aman was well finished off by Kamran to make it 3-1

In the mid afternoon encounter, Ten men Services had to dug deep in the final 15 minutes of the game to hold on to their slender one goal lead. Services broke the deadlock first around the half hour mark when Lallawmkiwa PC converted his spot-kick with a neat finish. Minute before the half-time break, Lakshadweep were awarded a penalty with Savad made no mistake in to pull things on level terms.

On restart, Services took the lead quickly after a shot from outside the box by Sabir Khan nestled in to the back of the net. With a one goal lead the side look comfortable however, with 15 minutes to full-time; a rash challenge from goalkeeper saw the referee pull out a red card. With all three substitutions already done, Service played the last 15 minutes with ten men and a makeshift Goalkeeper. Despite best from Lakshadweep, Services held on to their lead as the game ended at 2-1.

Both Services and Maharashtra now face each other in the final group game on 30th with the winner qualifying for the final rounds. A draw for Services will also be enough as the side has better goal difference as an advantage.