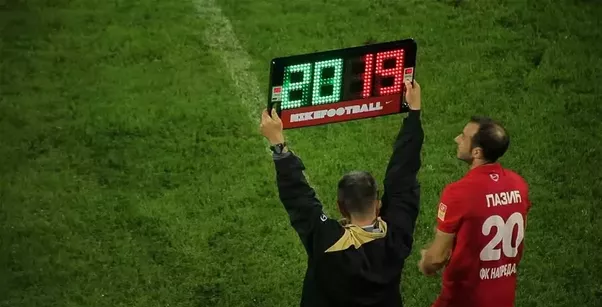 Various new changes like 4th substitution in extra time, use of electronic devices etc. will be now immediately in effect in several UEFA competitions.

Football Law Enforcement Board (IFAB) has adopted number of new amendments like the number of substitutions, number of listed substitute players, the number and location of additional technical seats and the use of electronic means like Laptops for staffs. While some of these changes will be in effect in UEFA Champions League and UEFA Europa League, others will be used in various competitions like 2020 European Championship.

This rule will be used in the following competitions:

An additional substitution is allowed in the following  competitions (the maximum of three substitutions in regular time is still valid):

If less than three substitutions have been made in normal time, one team will still be entitled to a total of four substitutions in the event of extra time.

Also Read: Late goals from Thailand hands India U16 their 2nd loss of the campaign

Use of electronic means of communication in the technical zone

Another new rule that will take effect in all UEFA Competitions is the use of electronic devices like Phone, Tablets and Laptops. According to this rule, the hand-held electronic equipment can be used by coaches and team staffs from the stands or on the bench if it is directly related to player’s welfare or safety, or there are tactical/coaching reasons. These rule received a major boost after medical officials failed to notice Ramos-Karius collision in 2017-18 champions league final, which could have resulted in serious concussion.

Small portable devices like Microphone, headphones, earphones, mobile phone, Smartphone, smart watch, tablet, laptop will all be allowed to used. Team Officers using improper equipment or behaving inappropriately in this context will be expelled from the technical zone.