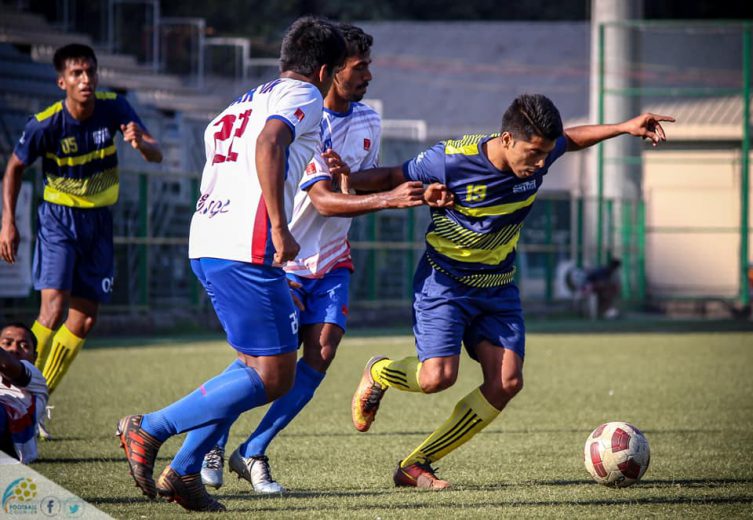 Newly-promoted Dena Bank was hammered 7-0 at the hands of ONGC who is on a roll in Elite Division Corporate Group. Out of the six games played, ONGC has won five of them, averaging at least three goals per game. They’re already four points clear at the top and looked in firm control so far this season.

Their star forward Himanshu Patil is in form of his life. The sturdy striker bagged a fantastic hat-trick along with Arif Shaikh who was equally tremendous for ONGC. New signing Vinod Pandey opened his account as well after finding the back of the net in the second-half.

In Elite Division Private Group, we witness a thriller on Friday evening. Spartans Rhema who were in a comfortable position to take away all three points conceded a late goal to share the spoils in an eventful 2-2 draw.

Omkar Raut had given Mumbai Muslims a fine lead in the 15th-minute but Rhema bounced back with two goals in two minutes to take a shock 2-1 lead. Ricky Karker leveled the score before Ruchir Goswami’s sublime strike put Rhema 2-1 in front.

In the second-half, Mumbai Muslims were a better side. They kept on creating chances but their poor finishing kept them on the back foot. After missing a couple of sitters, Mumbai Muslims finally leveled the score.

Rhema’s Goalkeeper Sachin Tandale’s misjudged the ball in the 89th-minute which put Omkar completely through on goal. He didn’t hesitate and comfortably placed his effort into the back of the net to snatch a draw.