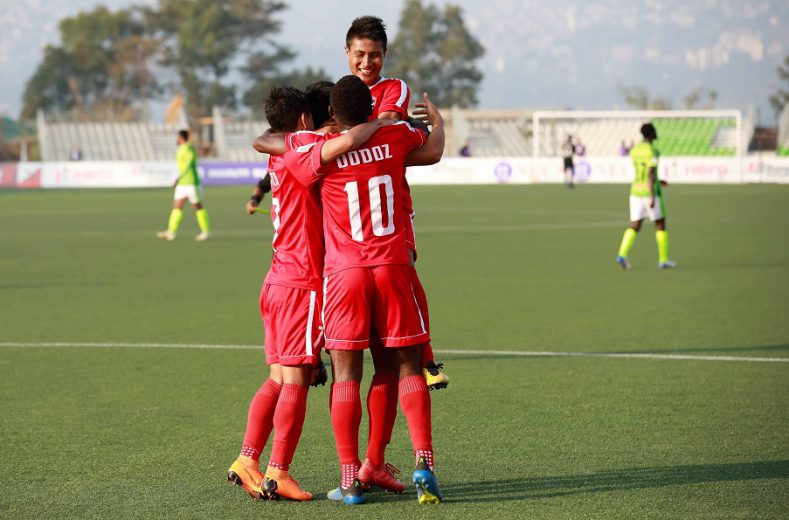 Aizawl, 29th December 2018: Aizawl FC huffed and puffed, but they finally got over the line with all three points in the 12th Hero I-League match against Gokulam Kerala FC at the Rajiv Gandhi Stadium in the Mizoram Capital, on Saturday, 29 December 2018.

Ansumana Kormah opened the scoring on the 51st minute, before Mapuia and Rochhar Zela added two more on the 63rd and 70th. Gokulam mounted a late surge deep in added time, when Joel Sunday scored two in the last two minutes of injury time, one from open play, and the other from the penalty spot. However, it was too little, too late for the visitors.

With both teams winless in their last three games, both the coaches took a cautious approach to the game with few chances for both sets of players. The home side carved out the first goal-scoring chance of the match; Chhara from the right flank sent in a delightful cross but Mapuia could not guide the ball towards goal as his header flew just wide of the post.

Gokulam found it hard to stamp their authority in the match as Raikhan’s boys pressed high. Left-back Vanlalthanga, who was playing his first match in the Hero I-League had a thunderous shot from 35 yards out but was unlucky as Kunniyal parried it above the crossbar.

Bino George tried to influence his player form the touchline as the Kerala side attacked from the left wing with Jayaraj proving a handful for the new boy Lalrosanga. Musa and Suhair VP linked well for the away side but could not test Aizawl goalkeeper Lalawmpuia.

Liberian forward Kromah had the best chance in the first half; Chhara bamboozled Gokulam left-back Dimple Bhagat and sent a low cross to Kromah, who was free in the six-yard box, the striker could not connect his shot as it was easily cleared by the Gokulam defenders.

Bino Geroge made a tactical substitution at the start of the second half, putting forward Rajesh in place of midfielder Rashid. The Kerala attacker could hardly settle when Aizawl scored the first goal in the 51st minute through Ansumana Kromah. Left-back Vanlalthanga’s non-sense clearance was not dealt with by the Gokulam defenders as Kromah slipped from the defenders to coolly slot the ball in the back of the net.

The new boys of Aizawl played a crucial role as the second goal was assisted by Rinchhana. The diminutive midfielder’s defense-splitting pass to Mapuia was converted calmly by the striker, who had a few sticks from the fans before his goal.

Bino’s team could not find a way against the former champions as Alfred anchored the midfield, leaving room new boy Rinchhana to play freely. Aizawl ran riot against the Kerala side as Chhara scored his first and the third goal of the match in the 70th minute. The 5”5’ winger from the Aizawl academy toyed with Gokulam defenders before he put the ball past Kunniyil.

Aizawl fans had started to leave the stadium to beat the traffic when Gokulam had a late upsurge, scoring two goals in added time. Joel Sunday redeemed himself as he scored in the 93rd minute after missing a golden chance for his side a minute prior to his first goal.

Aizawl defenders were left scratching their heads when Hmingthanmawia was flagged hand-ball in the dying minute of the game, referee Raktim Saha pointed to the spot. Joel Sunday stepped up, to take a few stuttering steps before he sent Lalawmpuia the wrong side of the goal. Gokulam’s hopes to score their equalising goal was halted when the referee blew the final whistle seconds after Sunday’s second goal.

Aizawl have now garnered nine points from 10 matches, leapfrogging the young Indian Arrows side to place themselves ninth on the table. Gokulam are now winless in their last four matches, collecting 10 points from as many games. Bino George would have to conjure all his tactical nuances in their upcoming game against the high flying Chennai City if they are to collect three points in the South Indian Derby.