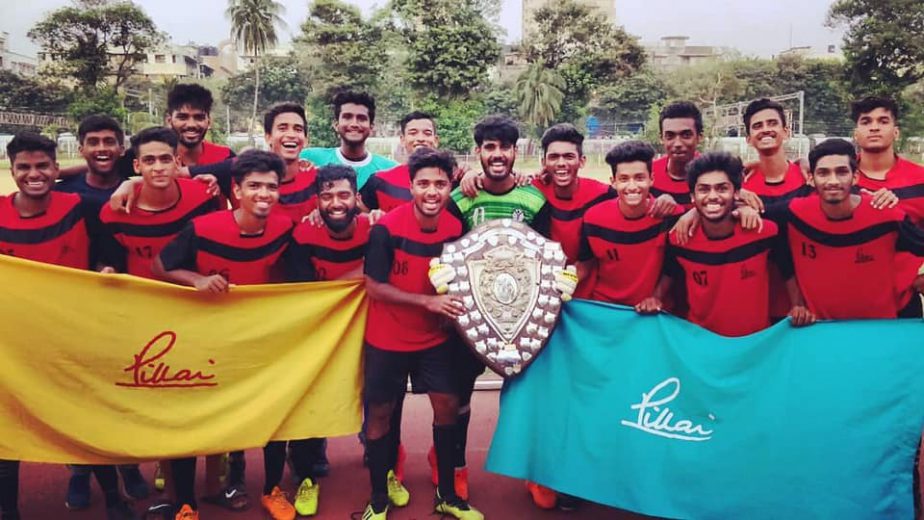 In a highly physical encounter, cards flew out of Referee’s pockets quite often with as many as five players getting under the referee’s book. Daniel Muthu, Ashish Melroy, Neol Dias were shown the yellow card early in the game as the match trudged towards the break with deadlock yet to be broken.

In the second half, both sides showed better intent going forward but it was Pillai that took the lead. Around the hour mark, Ashish lalge’s strike found the net to make it 1-0. Fifteen minutes later, Pillai were in a bit of bother when Abu Hamza received marching orders from the referee. However two minutes later, Ashish calmed down the nervous moment for Pillai’s with his second goal of the day. Thakur College’s late resurgence made little impact as the match ended at 2-0 scoreline in favour of Pillai College.

This is Pillai college’s second title in their last five tournament appearances, with the other three appearances ending in runners-up position. The consistent performance from the Pillai college has not gone unnoticed as two of their former players (Rahul Bheke and Nikhil Poojary) are now professional footballers playing at the top level. Rahul Bheke plays for one of the top clubs of the country i.e. Bengaluru FC while Nikhil Poojary has represented the country in SAFF Cup and more recently against China friendly too.

Also Read: ISL : Will the International break help the champions find their feet