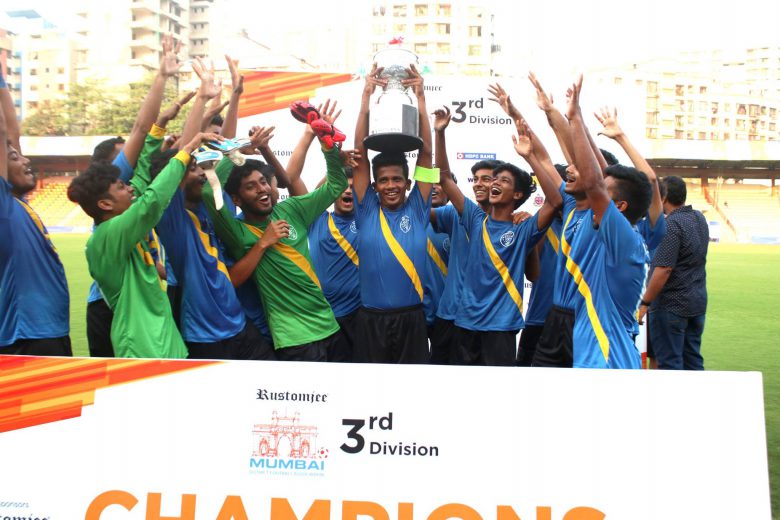 In an entertaining final encounter, Footie First FC came out as winners over Sanpada FC on tie-breakers that went to sudden death

The finale of MDFA 3rd Division lived up to the billing as an enthralling game saw the match go to penalty shootout which extended further to sudden death. Footie first FC held their nerves better emerging victorious over Sanpada FC.

Earlier in the day, Om Sai Seva Dham edged Lemon Break SC 1-0 in the 3rd place match. In the eight minute of the game, a through ball from Om Sai player Daryll for Navin Negi resulted in a poor clearance from Lemon Break SC goal keeper as he ended up conceding a penalty. Jersey no. 5 Reuel Kundaer duly converted the spot-kick with a powerful low shot to right end of the post with the Keeper stranded at his place.

In the final encounter of MDFA 3rd Division, Sanpada FC faced off against Footie First FC. Both sides started the game warily, Footie first FC had the first big opportunity when early in the game a long ball in to box breached the Sanpada defence; however footie first striker’s attempt was weak as Goal keeper regained the possession. Ten minutes later, a long throw into the box was heading goal wards but was brilliantly tipped over the bar by Sanpada custodian, the resulting corner saw, Ranson patel almost making it 1-0 for Footie First FC only to be denied by the bar.

Soon Sanpada came in to game with couple attempts of their own with their no. 6 Aditya Dhumal’s attempt after a fine run into the box was denied by the keeper. Neither side managed to beat their opponent’s keeper as they went into break. In the second half, Sanpada started out better with couple of chances however nothing concrete came out of it. Both sides soon began carving out opportunities but failed to produce the desired result in the final third as the match trudged towards full time without a goal.

In the tie-breakers Footie First FC started out brightly converting their first 2 attempts while their keeper Aryaman came out with a crucial save. However Sanpada who had their defender between the post doing the keepers honours soon produced a save and were back in the game. In the final mandatory round, Footie first player missed the post to concede advantage to Sanpada FC, however in the dramatic turn of event Sanpada missed the opportunity as the game went to the sudden death. Where Footie first converted their chance followed by a brilliant save from Ranson to deny Sanpada and there by lifting the trophy.