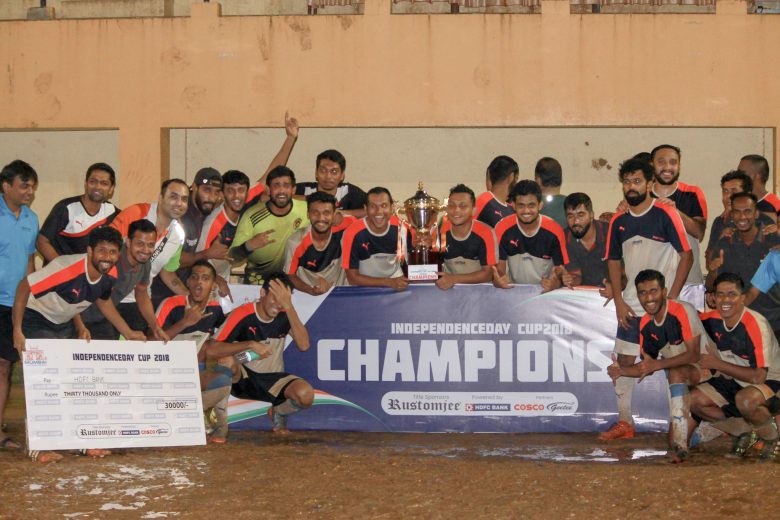 The final day of the Independence cup had spectators chew up their nails as the result of six of the seven knock out games including the final were decided on tie-breakers.

Riding on a combination of exceptional penalty takers, calm Goalkeeper and a bit of luck, MDFA’s newly promoted elite Division side HDFC Bank defied all odds and challenges of facing other division clubs to lift the Independence Cup. On their way to the coveted trophy, Bankers first faced Mumbai customs in a quarter-final game that ended in stale mate after regulation time, after which they turned out triumph in Penalty shootout.

Meanwhile in other quarter final fixtures, UBI edged Western Railways on a hard fought penalty shootout while Mumbai Strikers overcame Century Rayon on similar lines of penalty shootout. The only game of the day to end at regulation time was played between Kenkre FC and Millat FC where the former emerged victorious courtesy of Ajay Shah’s 4th minute strike.

In the semi-final game, HDFCBank clashed against Kenkre and after holding on to a goal less draw at the end of regular time, HDFC edged Kenkre 4-3 in penalty shootouts. In the other semi-final encounter, UBI handed Mumbai Strikers a defeat and once again it was the tie-breaker that turned out decider.

In the final encounter of the tournament, HDFC Bank came up against Union Bank of India side and the match despite best efforts from both side resulted in 0-0 draw at the end of normal time. And once again for the third time on the same day, HDFC overcame their opponent via tie-breakers to lift the trophy.

Also Read: Independence Cup Day 1 Round up: Upsets, Tie-breakers highlight of the day