Thirty-six major corporate teams will be fighting out for the penultimate prize in four separate categories including a women’s trophy.

The tournament has been organised by Turfs’n’Meals, India’s first company which organises sporting events and catering services on same platform across Mumbai. The sole purpose of this company is to encourage the current and upcoming generation to Eat Healthy and Stay Fit as its Tagline says “Fit India. Healthy India”

Since its inception in April 2017, Turfs‘n’Meals has been a popular name across the Mumbai Football circuit. Till date it has organised about 7 Open Tournaments under various categories all across Mumbai. It was also the official food partner of India Football Tour 2017 Mumbai Leg of which the finals will be played among 32 countries in Shanghai, China.

Joga Bonito ,who are the champions of both Neymar Junior 5 and Zeven India Football Tour National finals currently, along with Kalina Rangers, who were the other finalists in Neymar Jr. 5 will be felicitated during the event for their efforts in the tournament. Joga Bonito will also share the honour of representing Team India in both Neymar Jr. Finals in Brazil and F5 World Cup India Finals in Shanghai, China.

Overwhelmed by the huge response to the tournament, the Director of The Corporate Masters Cup Mr. Sandeep Shetty states, “The purpose of this tournament is to make sure more and more corporate companies come out and participate in such events, which will help their employees to stay fit and healthy.”

Sandeep Shetty and his team has put in lots of effort to make sure that all goes well during the competitions on 19 May, with the director celebrating his birthday on the same date as of the tournament.

The tournament will have 4 categories Elite, Championship, Plate and Women 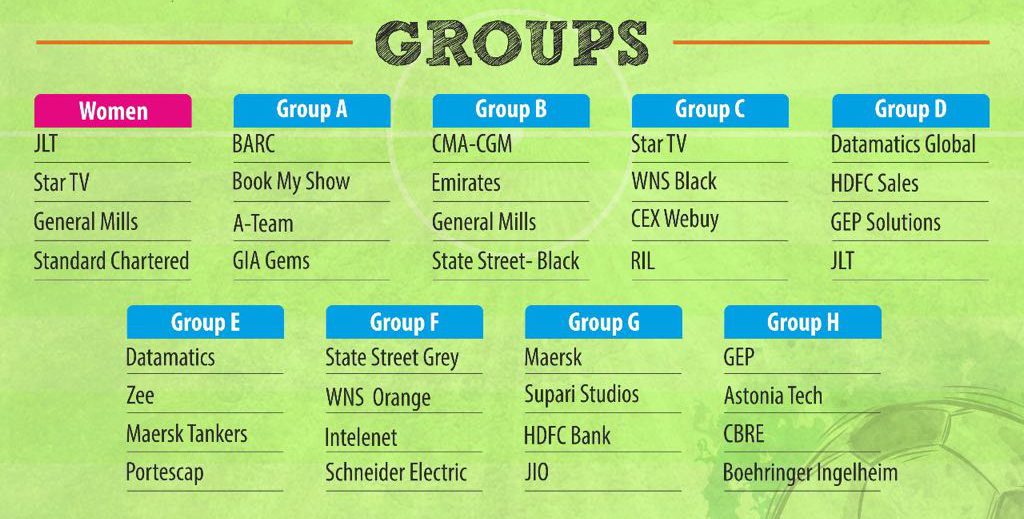 32 teams have been divided into 8 groups with top 3 of each heading towards Elite Cup, Championship Cup and Plate Cup respectively. Zee and WNS will be the favourites for the tournament with both the sides having recently won Platinum and Gold Cup in the recently concluded Ace Champions Cup. Ace Gold Cup Runner ups Intelenet will also be team to look out for along with Star TV, HDFC and Astonia Tech who could also turn out to be the dark horses of the competition.