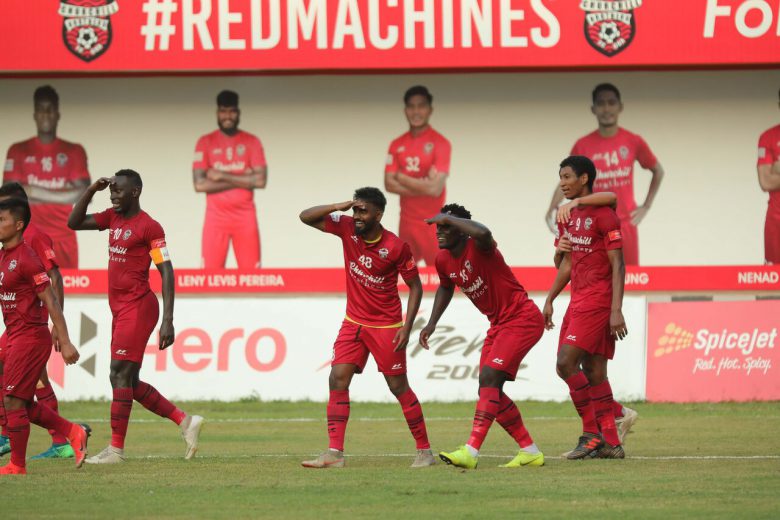 Goa, December 9, 2018: Goan powerhouse Churchill Brothers FC Goa not only maintained their unbeaten record but also got within sniffing distance of table toppers Chennai City FC with an impressive 4-1 victory over former champions Aizawl FC at home on Sunday.

At Vasco Da Gama’s Tilak Maidan, the two-time former champions scored through Khalid Aucho, Israel Gurung, Anthony Wolfe and Willis Plaza while Aizawl’s only goal came from Liberian striker Ansumanah Kromah. Churchill went into the half-time break two goals ahead while the rest of game’s five goals came in the second half.

With their third win of the league campaign, Churchill have now moved to the second spot with 13 points from seven games. Chennai are four ahead having played the same number of completed games. Aizawl remain stranded on the ninth position with five points from eight games.

As far as the starting eleven went, the hosts fielded an unchanged side from their previous game against Gokulam Kerala, but Aizawl coach Gift Raikhan made as many as four from the eleven which started against Real Kashmir five days back. Kyrgystani Bektur Talgat got a start and so did Mapuia and Duata. Rinfela, David and Hmingthan Mawia were the players replaced.

The home team lost key defender Hussein Eldor early in the game through injury and had to be replaced by Shillum Peres who got a first game in the season. Even then, they were all over the former champions in the first half.

Right winger Israil Gurung in particular, adjudged Hero of the Match later, had a brilliant half claiming an assist for the first goal by Aucho, besides scoring the second and in general made Aizawl left back Lalram’s life miserable down that right flank.

So did Gambian Dawda Cessay on the left flank for Churchill and the hosts not only dominated possession by a mile but also had five shots at the Aizawl goal to none for the visitors.

Red Machines took the lead in the 23rd minute courtesy a stinging volley from Ugandan Khalid Aucho. Gurung delivered a wonderful free-kick from just inside the Aizawl half on the right. The delivery drew Aizawl goalie Gurpreet out of his line and with league top scorer Willis Plaza also looking to pounce, the ball bisected both of them and fell for Aucho, whose powerful first-time-angled volley, bulged the Aizwal side-netting on the far side.

Gurung then claimed his second goal of the 12th Hero I-League campaign just a minute later when he headed home from a perfectly delivered Cessay cross from the left flank. Churchill was on a role by then.

Churchill could have had more as Willis Plaza missed two clear chances, one in the 37th minute when he hit the Aizawl left upright and then off another great Israel Gurung cross from the right flank, shot straight to Gurpreet from close in the 80th minute.

In the second half, Raikhan showed urgency and effected a couple of changes at the onset bringing in David and Rinfela.

It did pay off temporarily as Aizawl got one back in the 54th minute through Kromah who netted his third of the campaign. Mapuia got a free-run at the Churchill defence and put in a perfectly weighted cross for Kromah rushing inside the box on the left. The Liberian made no mistake and slotted it in past James Kithan in the Churchill goal.

A minute later, Mapuia could have helped Aizawl draw level as his flying header to a Lalram cross from the left hit the bar and came back.

Churchill’s Romanian coach Petra Gigiu then made an inspired substitution, bringing in Trinidadian Anthony Wolfe to replace Lamgoulen Hangshing in the 60th minute.

A minute later, Cessay found him inside the box from one of his trademark crosses and Wolfe, with his first touch of league, shook off two Aizawl defenders, with his second and third and with deft body swivels, fended off two more and with his fourth, stabbed the ball into the Aizawl net past Gurpreet.

Wolfe’s Trinidadian mate Plaza was also not to be denied on the day as defender Wayne Vaz’s attempted cross caught Liberian Alfred Jaryan’s arm inside the Aizawl box and referee Palmson Moses Raj had no hesitation in pointing to the spot. Plaza scored for his seventh goal of the campaign, although Gurpreet called correctly and almost thwarted him.

Plaza, in fact, missed at least three more clear chances to score, but in the end, it was a job well done for Gigiu’s side who now look serious contenders for the title.