Germany-Brazil semifinal saw a record 35.6 million tweets, much higher than the final’s 32.1 million 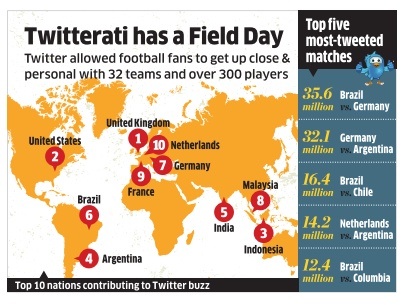 Twitter and Facebook have scored new records during the FIFA World Cup, as soccer fans and others got into the social media to discuss everything from Robin van Persie’s magic goal to Neymar’s injury and Lionel Messi’s miss in the final.
As many as 672 million tweets related to the tournament were sent out in the past one month. And on Facebook, during the June 12–July 13 World Cup, more than 350 million people had conversations around the topic, generating three billion interactions, including posts, comments and likes.

Sunday’s final generated 32.1 million tweets. But there were more tweets — 35.6 million – during the Cup-defining Germany-Brazil semi-final game, making it the most-discussed event in sporting history, said the microblogging site.

Aneesh Madani, head of sports at Twitter India, told ET: “India is a

top 10 global market for Twitter and this was reflected in activity around the World Cup as well.“

From Mario Balotelli’s cheeky tweet to Lukas Podolski’s selfie after the final, the live, public conversation allowed football fans to get up close and personal with all 32 teams and more than 300 players who were engaging on the Twitter platform.

“India was responsible for nearly 3.2% of the entire buzz on Twitter and came in at the fifth position when it came to discussing the final,“ said Bangalore-based Bhupendra Khanal, chief executive of social media aggregation company Simplify360. Argentina’s Messi was the most discussed player, while Germany was India’s choice for the final.

“Of the 672 million total tweets, we saw the bulk of the conversation during the live matches,” said the Twitter blog. Indian Twitterati