Air India have lifted the Elite Division title for the 2013-2014 season by playing out a draw in the all important fixture against ONGC. ONGC another one of the probables to win the league finished in 2nd place having drawn two games, with Air India & Mumbai Customs, fell short by two points to hand the ‘airmen’ the title

13 points from 5 matches bought Air India on the top, ONGC 11 points ahead of Western Railway with 9 points finished in second and third place respectively. 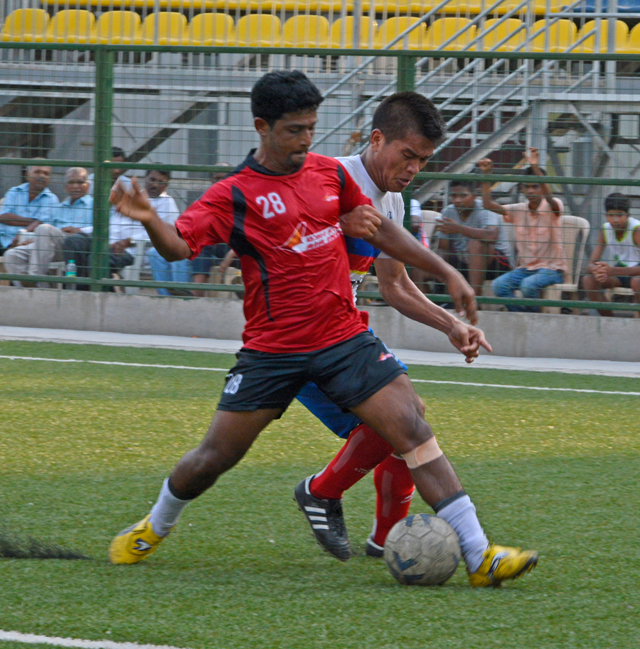 As expected Air India needed a draw to go clear at the top for which they had to play safe. In a very crucial match Air India were playing without their key players foreign recruits Okorogor Praise and ND Opera who were ruled out due to the suspension (2 yellow cards). They are essential as together they scored 13 goals combined, this is almost half of the total goals Air India have scored this season

Except for few moments in between and the last 20 minutes of the game both teams played safe, Air India knowing a win or draw would propel them to the top of the table, on the other hand ONGC needing a win knew that they could not afford to lose this game. or Air India there was only one good chance in which came in the 34th minute to score which got wasted by Joychand Singh in the small box. It was a brilliant assist from Vijit Shetty who had an outstanding day on the field, he has managed the Air India midfield very efficiently, his efforts were awarded as selectors have judged him the ‘Best Player Of The Elite Division’.

In second half ONGC started pressurizing the Air India defense, they made few brilliant moves but couldn’t get through. Kailash Patil was unlucky not once, but thrice as he failed to score, one header in the the small box went out, another attempt was blocked by Air India goalkeeper Ubaid. Certainly looked like a bad day at the office for him.

20 minutes to go and ONGC’s E. Lalmuan Puia got a second yellow card for a wrong tackle on Air India goalkeeper, referee Gadhe had to send him off. With 10 men ONGC were still attacking knowing the importance of the win and missed few chances until the final whistle blew for the celebrations in the Air India camp, who were running and screaming of joy. Football Counter congratulates the players and officials of Air India on their success. Well Done!