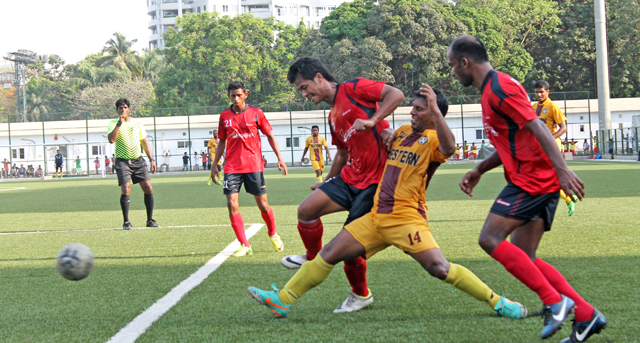 Air India and Western Railway players fighting for the ball

It was the 4th straight win for Air India in the MDFA elite division play-off, with just one match remaining, they have earned 12 points from their last 4 matches in the Super ‘6’ playoff for the league title, whereas ONGC have also played 4 matches, with 3 wins and a draw making their tally 10 points. A deciding match will be played between Air India and ONGC on Monday 19th May, 2014 at the Cooperage at 4.00 pm. For Air India a draw will be enough to lift the title, whereas ONGC desperately need a win to get ahead of the ‘Airmen’ on the points table

Western Railway, who began with the hope to achieve something outstanding this year, had all their hopes dented after the 21st minute of play when Air India’s ND Opera broke the dead lock, it was his 6th goal in the league. It was initiated from the defence, with left back Bhusan Thube passed to Alan Dias, who cleverly setup an opportunity for ND and he did justify Alan’s effort by finishing the move with easy.

The story would have been different if Rueben D’souza could finish a good opportunity earlier in the 16th minute, as a brilliant move began from the the Western Railway half line and turned out into a chance for Rueben to score, he did well but unfortunately his shot hit the bar.

Soon after Air India’s fist goal, again Alan Dias scored the 2nd brilliantly, from a  half volley which was set up by Okorogor’s neat cross form right flank.

After the 2nd goal Western Railway were on the back-foot until a goal was scored by Rueben D’souza after 30th minute. Kenniston’s through ball beat Air India defence and Rueben cleverly lobbed the ball over goalkeeper Ubaid.

In the second half though Air India were dominating most of the play but missed a few sitters, Western Railway were trying hard and came close to a scoring opportunity but Air India’s goalkeeper Ubaid did well and kept the ball out. Substitute Siddharth Nayak barely 19, put up a gud show in his 20 minutes of play but later he was sent off, he earned a red card for an off the ball incident with a Western Railway player.

A point in their next game would be a reason to celebrate as Air India will be the unbeaten champions of the MDFA league if they manage things well on Monday 19th May in their final encounter against ONGC.