Mumbai District Football Association (MDFA) 3rd division qualifying round has kicked off at St. Xavier’s ground, Parel on Monday 21st July, 2014. 51 teams have featured in this qualifyng tornament, divided into 17 groups starting from Group A to Group P consisting of 3 teams each. Each team has to play 2 matches in their respective group and team the finishes with the most points in their group will qualify for the MDFA 3rd division league season 2014-2015.

St. Xavier’s ground, Parel would be the most busiest ground for next 9 months, 51 matches have been scheduled till 11th August, 2014. It is not an easy task to manage such tournaments with these many teams, this surely takes a lot of efforts. Mumbai District Football Association (MDFA) a Football body of Mumbai and its suburbs has done a great job and they are managing such a huge challenge upfront. The 3rd division since the year 2012-2013 has fielded more than 160 teams, 20 groups consisting of 8 teams in each group. Lots of football is served for viewers at St. Xavier’s ground, Parel. 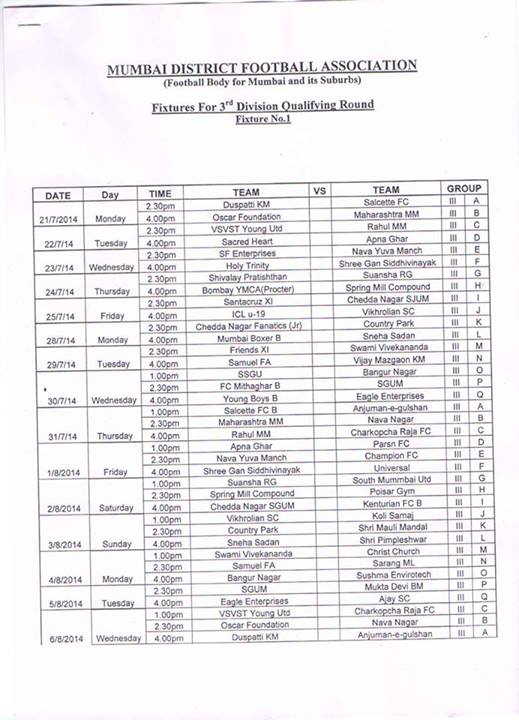 Other MDFA league’s tentative dates are as follows: