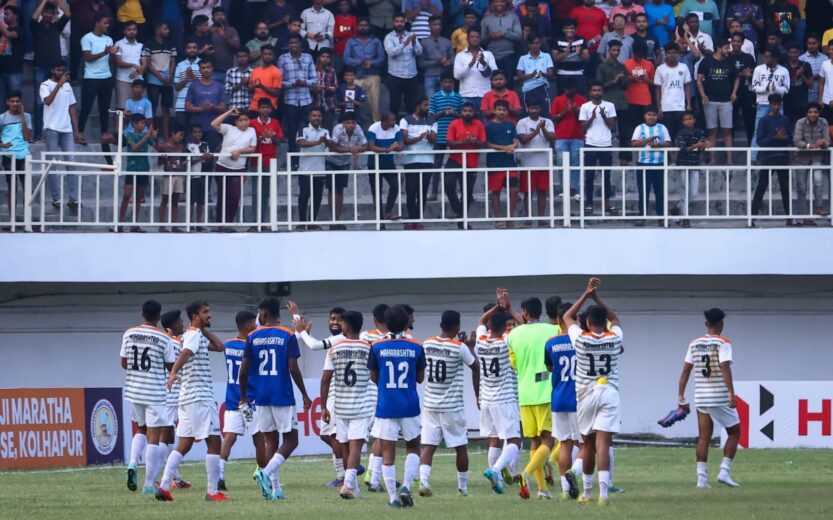 Madhya Pradesh faced off against Maharashtra in the third Group 4 match of the Santosh Trophy, but it was the latter who came out on top with a dominant 4-0 victory.

In the early proceedings, Madhya Pradesh had a strong start with a series of throw-ins, a freekick just outside the box, and a corner. However, Maharashtra’s defense held strong. As the match progressed, Maharashtra began to assert themselves and created several chances. In the 10th minute, Maharashtra captain Shravan sent in a low, dangerous ball into the box that striker Sufiyan Shaikh almost connected with, but Madhya Pradesh goalkeeper Shiwang Hurmade made a strong save.

In the 21st minute, Madhya Pradesh defender Atharva Basavraj brought down Ashley Koli inside the box, resulting in a penalty kick. Arif Sheikh stepped up and confidently converted the kick, sending it past a diving Shiwang to give Maharashtra a 1-0 lead.

Maharashtra continued to threaten with their wing play from Shravan and Ashley Koli, while Madhya Pradesh’s attacks were easily dealt with by Maharashtra’s defensive duo of Tejas Raut and Pavan Mali. Maharashtra goalkeeper Yasheel Shah was rarely troubled.

In the second half, Maharashtra came out aggressively and were rewarded with an early goal. Sufiyan Shaikh latched onto a pass from the midfield before making a darting run past three Madhya Pradesh defenders and placing the ball past the onrushing goalkeeper to make it 2-0.

In the 66th minute, Johnson Mathews on the wings managed to send in a cross into the box that Arif Sheikh connected with first-time, scoring his second goal of the match to give Maharashtra a 3-0 lead.

The match ended with a dominant 4-0 victory for Maharashtra, much to the delight of the 8000-strong crowd at the Chhatrapati Shahu Stadium. The team’s win was a rewarding moment for their devoted fans, who were cheering them on throughout the match.