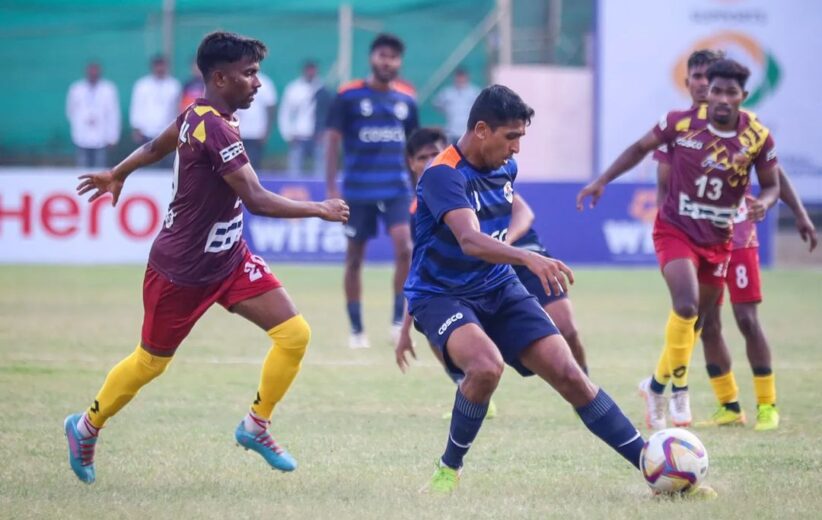 Maharashtra’s dreams of topping Group IV of the Hero Santosh Trophy were dashed as they were defeated 2-1 by West Bengal in their final group fixture.

The match, played in front of a raucous crowd of 20,000 at the Shree Shiv Chhatrapati Sports Complex in Kolhapur, saw Surajit Hansda and Deepak Kumar score first-half goals for Bengal, while Arif Shaikh scored a late consolation goal for Maharashtra.

The game began with end-to-end football, and Maharashtra had an early chance when Ashley Koli released Arif Shaikh through on goal. However, an alert West Bengal goalkeeper Shubham Roy came off his line to clear away the ball just in time, denying Arif a shot on goal.

West Bengal took the lead in the 8th minute, as a short corner routine saw Deepak Rajak deliver a cross to the far post, where it was headed across the goal for Surajit Hansda to tap it in. The Kolhapur crowd tried to raise the spirits of the players, and Maharashtra had an immediate response when a corner routine saw the ball fall to Omkar Patil at the edge of the box, whose shot came off the woodwork. A minute later, Omkar set up Sufiyan for a shot on goal, but his strike went inches over the bar.

Maharashtra continued to attack and constantly threatened, but failed to find the net. Against the run of play, in the 38th minute, Bengal doubled their advantage as Tarak won the ball in the middle and passed it across for Dipak Kumar Rajak, who struck a first-time shot that curled into the left corner of the post. The player’s celebrations did not go down well with the home support, as the referee had to intervene to calm things down.

In the second half, Maharashtra continued to mount pressure in attack, but Bengal struggled to create chances. The crowd’s constant booing of Bengal’s touches and cheering of Maharashtra seemed to have affected Bengal, as they struggled to maintain their composure. A Johnson Mathew’s free-kick to the far post found Pavan Mali’s header that went over the bar.

A few minutes later Bengal had an attack when Dipak’s cross found Bengal captain Naro Shrestha, but the striker’s shot from close range went wide. The crowd’s constant boos to Bengal’s touches and cheers to Maharashtra seemed to have affected Bengal as they struggled to create chances while Maharashtra continued to mount pressure in attack.

In the 67th minute, Maharashtra had a golden opportunity to score as Sufiyan Shaikh won the ball and made a brilliant run on the left before firing in a shot that came off the goalkeeper. The rebound was then laid off for Ashley, whose shot went over the bar.

In the 77th minute, Maharashtra finally found the back of the net, as a mistake from Totan Das allowed Johnson Mathew to win the ball and run in attack before sending in a low cross behind the Bengal defense. Arif came across and struck it into the goal to make it 2-1 as the crowd went wild in celebration.

In search of the equalizer, Maharashtra coach Steven Dias brought in local Kolhapur boys Rushikesh Patil and Indrajeet Chougule, but despite the late surge, Bengal managed to hold on to their lead and secure the win.

The game ended 2-1 to Bengal, much to the disappointment of the 20,000-strong crowd. However, post-match, there was a good show of acknowledgment from both teams and crowd alike as a good week of football action came to an end.

West Bengal confirmed their spot on account of topping Group IV with all five wins, while for Maharashtra, despite the result, their spot in the final round of the Hero Santosh Trophy looks confirmed too as the second-best placed group team.