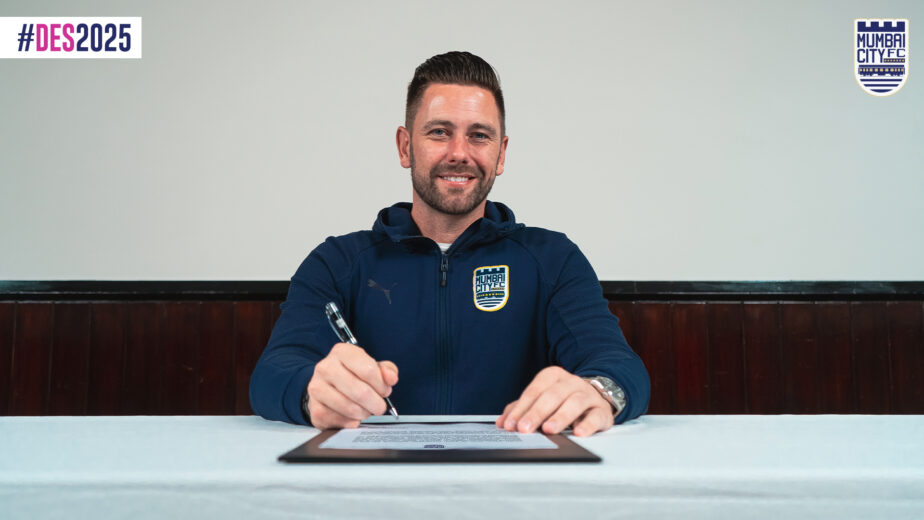 Mumbai City FC head coach Des Buckingham has signed a contract to extend his tenure at the club and within the City Football Group.

Having put pen to paper on a two-year extension, the Islanders’ Head Coach has reiterated his commitment to the club until the end of the 2024-25 season.

Buckingham arrived at Mumbai City in October 2021, having moved within City Football Group following his role as Assistant Coach at Melbourne City, and took charge of the Islanders only weeks before the start of the 2021-22 league season. Even though Buckingham’s Mumbai City narrowly missed out on the ISL playoffs in his maiden league campaign, the 37-year-old Englishman had laid the foundation of the attractive and attacking style of football he wanted to bring to the club.

The ground work yielded results shortly thereafter as Buckingham and Mumbai City went on to create history at the 2022 AFC Champions League. Mumbai City became the first Indian club to win two games at Asia’s premier club football competition, finishing in an unprecedented second place in the Group Stage, narrowly missing out on qualification to the knockout stages.

Having had the chance to craft and refine his squad over the summer of 2022, Buckingham led Mumbai City to the Final of the Durand Cup in the club’s maiden participation as his side showcased free-flowing, attacking football – a hallmark style of clubs in the CFG family.

Buckingham’s process has continued into the ongoing 2022-23 season of the ISL as Mumbai City currently sits atop the points table, unbeaten after the first 12 games of the regular season and having scored 36 goals.

Since arriving at Mumbai City, Buckingham has gone on to become the longest-serving Head Coach in the history of the Club. Having managed 45 games so far across all competitions, he has won 24 of the 45 – a 53.33%-win percentage – with Mumbai City scoring 95 goals at an average of 2.1 goals per game during his tenure.

“It gives me great pleasure to continue my time here at Mumbai City Football Club. When I came in 15 months ago, it was a new challenge for me but from the very first day, the Club, the staff and the players have trusted me and supported me so well – I cannot thank them enough. In my time here, I have learnt a lot about the Club, the players, the city of Mumbai and the culture. It has truly been an experience like no other.”

“With the support of everyone at the Club and of our colleagues at City Football Group, we have worked hard on developing a philosophy and an identity at Mumbai City and I believe we are well on our way to building something special. From our AFC Champions League success to playing week in week out at the Mumbai Football Arena in front of our passionate fans, I am certain that we’re only getting started. I am happy that I can be a part of this great family for the foreseeable future and I hope we can bring success to this great club and this wonderful city.”

“Des came into the Mumbai City family in a period of transition for the club and his work ethic and leadership has been nothing but commendable. Over Des’ tenure in the past 15 months, Mumbai City has grown tremendously as a club, both on and off the pitch, and a lot of that comes down to who Des is as a person, as a character and the principles he believes in.”

“Supported by the talented, young squad that we have along with a committed and able group of staff, Des has contributed to the growth and success of Mumbai City and developed several young players, all while entertaining all of us with beautiful, attacking, ‘City’ football. I am delighted that Des will be continuing on this journey with us, sharing the same vision and ambitions as us. I personally look forward to working closely with him and hope to enjoy successful seasons on and off the pitch in the next chapter of this wonderful relationship.”