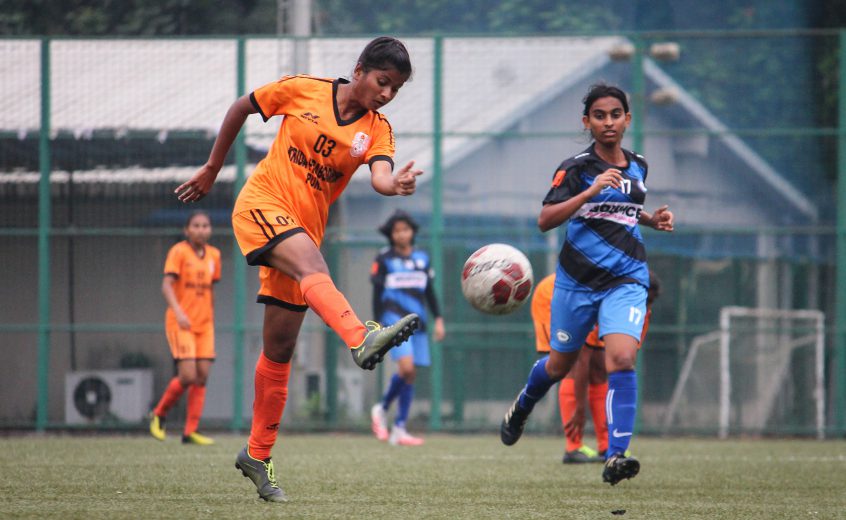 Captain Revati Kokare led from the front with a hattrick as Amma FC register a whopping 7-0 win, meanwhile Krida Prabhodini edge Next Sports Academy to keep pressure on table leaders.

Having picked their first win of the campaign in their last game against Pacangan FC, Amma FC continued their winning run with an emphatic 7-0 smashing of Next Sports Academy. Captain Revati Kokare led from front with a brilliant hat trick while super sub Rhea D’costa struck a brace as Amma FC completely dominated their opponent.

Amma FC started strong right from the start as Revati opened the scoring in the 12th minute, before Rakshanda Sonekar got subbed off in the 30th minute. Replaced by forward Rhea immediately got into action as she doubled the lead three minutes after coming into the game. Revati made it 3-0 soon after before Florian slot one in to make it 4-0 at the stroke of half time to give Amma FC a commanding lead. The story in the second half didn’t match as Amma FC continued their dominance although NSA did put better defensive show. In the 68th minute, Revati completed her hat-trick before Punam and Rhea added one each in the last ten minutes of the game to complete a comprehensive victory.

In the second game of the day, a late strike from substitute Vaishnavi ensured Krida Pradbhodini all three points as they moved to 3rd place with 12 points and just a point behind league leaders PIFA. In a back and forth game, Krida Prabhodini attacked well but often fell short of finishing line with India Rush SC showcasing solid defensive work. However super sub Vaishnavi Sonune threatened the most with her pin point free-kicks and it was her hit late in the game that resulted in the goal. After an initial free-kick from Vaishnavi from just outside the box was blocked away by the keeper for corner, Vaishnavi struck a sensational Olympic goal as her corner kick nestled directly into the far post to give Krida Prabhodini a vital three points.

Krida registered their 4th win of the campaign and are now at the heels of league leaders PIFA and SP Football Academy.