We cannot look back, and think too much: Thomas Dennerby MUMBAI: The morning after, there’s pride, as much there’s a bit of frustration at not being able to finish it off against IR Iran despite all the domination, and the chances created.

But that’s what spurs the Blue Tigresses, in their mission to take it forward together, towards their realistic dream of making it to the quarterfinals, which opens the doors for the play-offs for the FIFA Women’s World Cup.

Head Coach Thomas Dennerby never believes in lamenting. His philosophy stays simple – learn the lessons, and look ahead. “This game is over. The result is what it is. We can never look back. Now we have to work on our finishing and go at it again in the second match against Chinese Taipei and get the three points,” Dennerby commented at the online official post-match press conference.

“I think we have a solid defence, and defended well whenever they tried to counter-attack. A few tweaks to our attack, and we will be ready for our next opponents”, the 62-year-old said.

Group A of the AFC women’s Asian Cup is currently led by China PR, who have three points after defeating Chinese Taipei 4-0 at the Mumbai Football Arena, while India share the second spot with IR Iran, with both sides having a point apiece.

“It’s always good to come up with points in your first game, you stand a better chance of moving to the next round. We need to follow our plan, and try to get points against Taipei as well,” said Dennerby. “The only thing we can do is to focus on the next opponents, and not the table,” Dennerby averred. 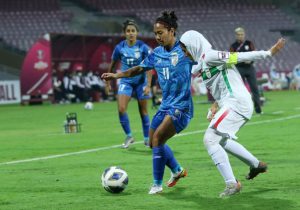 “It’s not time for that yet. Chinese Taipei lost to China, but they are a good team, and we need to play well against them.”

Wing-back Dalima Chhibber, who made a number of runs and crosses from the right flank, feels the team “can do much better.”

“We had a good game against Iran, but as a team, we could have been better. Now, it’s all about working on those little areas and coming out with a stronger mindset. We must focus and get those points that will help us advance,” Dalima stated.

“The positive we take away from our first match is that we created a lot of opportunities. That gives us a lot of confidence. Now it’s all about keeping up that fire, and the desire to get the job done in our next game. Football is all about coming back with a strong mindset the next day, and that’s exactly what we aim to do,” she opined.

Indumathi Kathiresan, who ran the show from the heart of the midfield, feels that the team has a strong mindset and is willing to make those sacrifices to put the ball in the net in the next match.

“I’ve never seen a bunch of girls with as strong a mindset as this team. We all have the belief that we can complete the task and hand, and our focus is already on the next game. A good result against Taipei would go a long way to help us achieve our target,” she said.

India will play their next game against the Chinese Taipei at the DY Patil Stadium in Navi Mumbai, on January 23, a match that will be broadcast live on the Eurosports channel, and streamed live on Jio TV.