We are definitely on the right way, says Thomas Dennerby 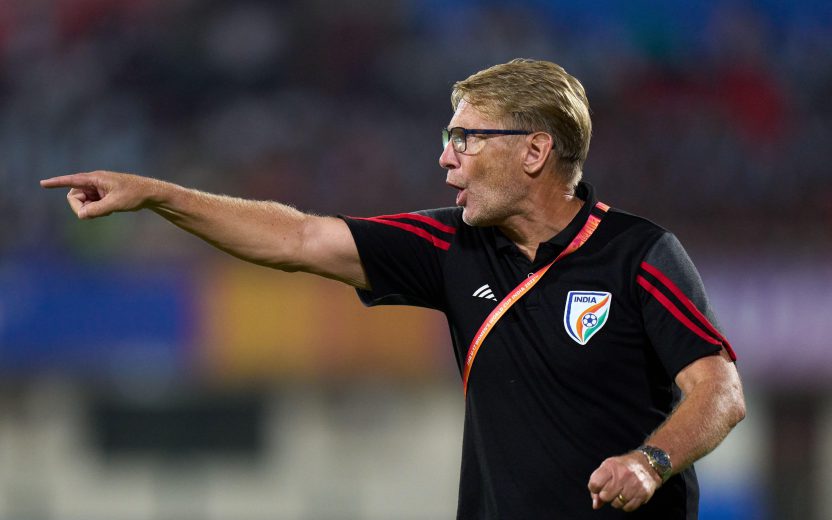 Despite the loss, the determination and grit displayed by the Indian side and the charged atmosphere at the Kalinga Stadium made the match a truly memorable occasion.

After the match, we sat down for a chat with India head coach Thomas Dennerby, the highly-experienced Swede, who shared his thoughts on a number of topics, such as his takeaways from the team’s performances, the progress made by the side and the incredible fan support, among other things.

Q: What is your assessment of the three results?

Dennerby: First of all, we came here with the aim to be the first Indian team to take points in a FIFA World Cup and we couldn’t do that. Of course, if you come to see it that way, we didn’t reach all the way that we aimed for with the team. However, I’m still proud of the girls because our performances have been better with each and every game and I think after the match against Brazil, most Indians also should be proud of the team because they were really, really fighting and also showed good combination play in a couple of situations. Definitely, we are on the right way.

Q: What are your takeaways from these performances from the girls?

Dennerby: I think that in general, we can defend very well. We were defending in an organized way and we were disciplined for most of the time during the 90 minutes. Sometimes, we made some small mistakes and if we do that against top-level teams, they will hurt us and that is a lesson we need to learn. It is not something you can learn in the classroom. You need to learn it on the field — to have your head cool all the time, so you don’t do such small mistakes because of stress or you think that you have less time than you actually have.

It would be wrong to blame the girls as they were always fighting and doing the best they could. I’m so happy also to see that the fitness level of the team was very good because we were never tired.

Q: What key learnings do you draw?

Dennerby: Firstly, when you’re more relaxed, you play better. You have to believe in yourself, and your strengths and you have to use them to your advantage. I think we should take away what I already said — the good fitness level, that we were ready to take on anything when it comes to endurance levels, speed, number of sprints, repeated sprints — that was not a problem at all for us.

Those are good but of course, one thing that we can work with is the attacking game in the offensive third, which includes around the opponent’s box, the final pass, composure in finishing, taking the right decision to pass the ball at the right moment and give it to forward players on the run, but that takes time. It’s easier to organize the defence and come into the small details of the attacking game. I’m still proud of the girls. They really tried.

Q: We have seen that with each game, the girls have performed better. What do you think was the reason for the same?

Dennerby: I think it’s very easy to answer this question because, with each and every game they play, they get more experience. They didn’t fear so much. We always show respect but I think that in the first game against the USA, we feared comparatively more and now, we were freer to play and tried to play accordingly. In the match, you are outside the frame that you put up together with the coaching staff and so on, but the girls definitely were disciplined.

But, we also need to realize the fact that five months isn’t very much to change and learn if you are not used to playing top international games since you are 14-15, as the other girls have done. So if you have the whole picture, as I have, and can compare it with other countries, I’m very proud of the girls.

Q: What are your thoughts on these players stepping up to the senior national team?

Dennerby:  A few of them have already been to the senior team. Astam (Oraon) was with them already during 2020-21. Shilky (Devi) was there as well before she broke her leg this spring and I think there are a few central midfielders who can definitely be there. I hope that we also have some forwards who can make the step up but it’s honestly too early to say because when you’re 17, there are a lot of things that can happen.

So, it’s very much up to each and everyone on how much they are ready to put in, how much they are ready to try to live their dreams and be a professional footballer. All the players have the talent to go, definitely, but it’s hard work because talent is just one part of it. You need to follow your training schedule and have that discipline. I think there are a lot of players here that definitely can be in the senior team in a couple of years.

Q: A lot of fans came to support the team in these three games. Your message to them?

Dennerby: I’m very happy that they were giving us that good support all the way and it’s not easy to give support when your team is under pressure. However, they were behind us all the time and I think also they understood very well how tough it is for us to play these good teams.

Thank you to each and everyone in India for all your support. We are super happy about the staff and players and everybody working with the team, so thank you very much to all the fans. Be patient with these girls. They’re going to come back, and then we’re going to win more games.