Having lifted the SAFF U-15 Championship in 2019 and topped the AFC U-16 qualifiers group in Uzbekistan with the junior setup, Maheson has tasted success and will be looking to make that count in the Hero I-League as well.

Speaking with the teenager about his experiences in the youth setup, Maheson said, “Being part of the junior national teams’ setup was an amazing experience. Representing my country and winning trophies was a special feeling for me. We got the opportunity to face several top-level teams from different parts of the world, and gain valuable exposure, which has played an important role in my development.”

The youngster was also quick to praise his former coach Bibiano Fernandes along with the entire staff and his team. “The experience also taught me the value of discipline from a very young age and the importance of training and eating right. I am thankful to coach Bibiano Fernandes and the entire team of staff and players, who helped me a lot,” said the grateful teenager. 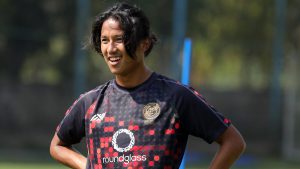 Maheson’s father works as a farmer in the small town of Govindagram in Manipur. He has come a long way from there but he is just getting started. “I started playing football at the age of nine and after giving a trial at SAI (Sports Authority of India) and getting selected, I thought that I could pursue football professionally,” said Maheson. He continued, “I am still learning and want to get as many minutes as I can in this team. The Hero I-League is a wonderful stage for young players like me to perform against the best in the business from different parts of India.”

RoundGlass Punjab FC have risen to third place in the points table of the Hero I-League after defeating favourites Mohammedan SC comfortably on April 10, 2022. Having scored his first goal for the club in their clash against the Indian Arrows, Maheson is relishing the chance to play under new head coach Ed Engelkes, saying, “Our coach likes to play an attacking brand of football and as an attacking midfieder myself, I try my best to supply quality passes to my forwards as well as score some goals myself. My relationship with the coach is quite good and I have been learning a lot from him.” 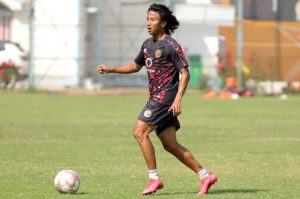 When asked about his targets for the season, Maheson reaffirmed that the entire team has one main goal.” As a team, we want to be among the teams that are fighting for the I-League title. At the same time, we want to play an attacking brand of football that inspires others to go out and play.”

The next challenge for RoundGlass Punjab FC will come on April 15, 2022 when they come up against TRAU FC.