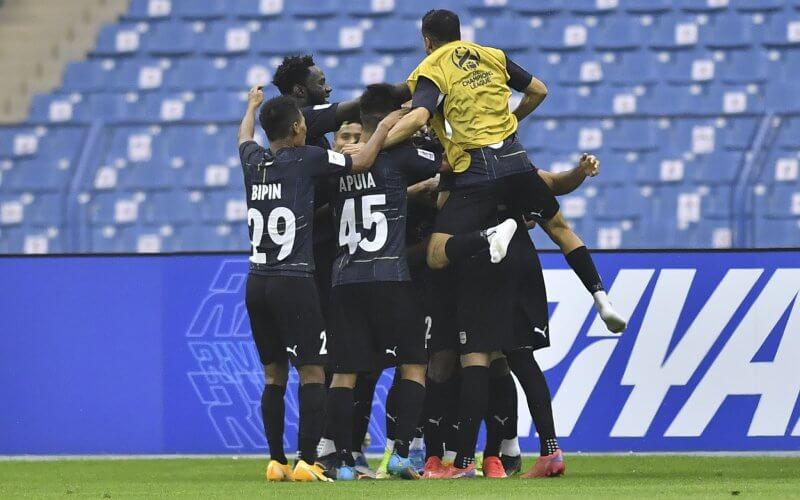 Mumbai City came back from a goal down to defeat Air Force Club 2-1 in Group B of the AFC Champions League™ in 2022 on Monday, the first win for an Indian side at this stage of the continental showpiece.

After a goalless first half, substitute Hammadi Ahmad gave Air Force Club the lead before Mumbai City rallied with goals from Diego Maurício and Rahul Bheke to seal the historic win at the King Fahd International Stadium in Riyadh.

Air Force Club asserted themselves in the game from the early minutes, pinning Mumbai City deep into their own half but the Iraqi side couldn’t convert their chances.

Air Force Club’s Alaa Abbas was causing all sorts of problems for Mumbai City but the forward should have done better in the ninth minute when his tame effort was easily collected by Mumbai CIty goalkeeper Phurba Lachenpa.

Mumbai City had their first look at goal just before the half-hour mark, Ahmed Jahouh finding space before setting up for Lallianzuala Chhangte, who blasted his long-range effort wide.

At the other end, Air Force Club missed a chance after Abbas headed a Dhurgham Ismail delivery high above the bar before the latter tried to force his shot from a tight angle.

Hakeem Shakir’s side were almost caught off guard in the 31st minute when Mumbai CIty’s Ahmed Jahouh sent an inviting cross into the danger area but Diego Maurício couldn’t keep his headed effort on target.

The best chance of the half fell to Air Force Club in the 34th minute but Hussein Jabbar struggled to guide Ismail’s effort into the back of net from close range while Chhangte was forced into a fingertip save three minutes later, denying Abbas’ effort.

Vikram Singh had a golden opportunity to put Mumbai City in front two minutes from the break but Jabbar was at the right place to foil his effort.

Air Force Club almost punished Mumbai City in the 52nd minute when Ismail dispossessed Jahouh at the top of the box before setting up Shareef Abdulkadhim, who with only the keeper to beat, sent his effort wide.

The goal finally came for Air Force Club seven minutes later when a swift attacking move deep in Mumbai City’s half saw the Iraqi side take the lead after Ahmad cooly nestled the ball into the back of the net from inside the six-yard box.

Mumbai City, however, were not to be denied when they were awarded a penalty in the 70th minute following Ali Kadhim’s foul on Maurício, with the Brazilian making no mistake to convert from the spot.

The equaliser proved to be a turning point in the game as Bheke doubled Mumbai City’s lead, heading home a textbook corner from Jahouh to seal the game and a historic first three points.