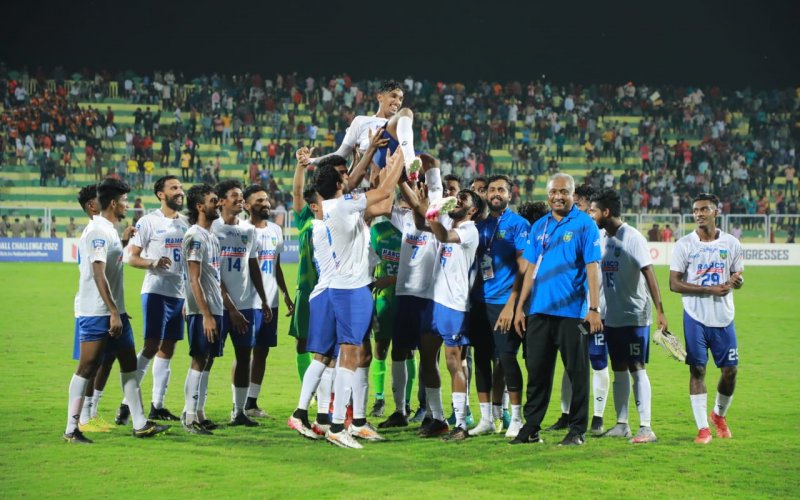 Super-sub Jesin TK scored five as Kerala thrashed Karnataka 7-3 to move a step closer to winning their seventh Hero Santosh Trophy title in the first semi-final at the Manjeri Payyanad Stadium here in Mallapuram on Thursday.

Prior to the match, Kerala coach Bino George had mentioned how he will never waver from his attacking philosophy and his team showed just that as they scored almost at will. It was a perfect display of attacking football with Jesin being the star of the night. The substitute striker showed calmness under pressure and with this display, a new star was born.

Kerala’s game plan was keeping hold of the ball and trying to thread the ball through the Karnataka defence. Skipper Jijo Joseph was the orchestrator in midfield as the hosts tried to go for the kill right from the whistle.

However, completely against the run of play, Karnataka took the lead. Their game plan was very simple, sit back and defend in numbers and hit the hosts on the counter. And the ploy worked a treat in the 25th minute. Solaimalai N made a fine overlapping run down the left flank and his ball found skipper Sudheer Kotikela lurking at the back post who made no mistake to hand the four-time champions an unlikely lead.

And it could have gotten even better. Biby Thomas’ side initiated another counter-attack with Kotikela holding off the defenders and laying off a perfect ball for the onrushing Kamalesh P. With just the goalie to beat, he poked his effort agonisingly wide, much to the dismay of his teammates and his coach. 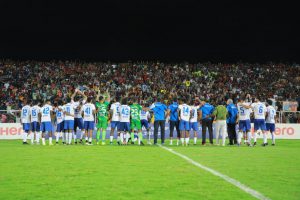 And that miss broke the back of the Karnataka players and suddenly Kerala roared back into the contest and how! And it all started after the Kerala coach substituted the ineffective Viknesh M for Jesin. And what an impact Jesin had since coming on in the 30th minute.

His first touch was almost a goal after a through ball was latched onto by the substitute but Karnataka keeper Kevin Koshy came off his line to good effect and thwart the striker. But in the 35th minute, Jesin proved too quick for Koshy as this time he beat the advancing keeper and slotted home to equalise as the capacity crowd went wild with ecstasy.

Some very poor defending by the defensive duo of Siju S and M Sunil Kumar meant another presentable opportunity fell to Jesin. And the lanky attacker made no mistake once again, as he toe-poked the ball past a helpless Koshy to hand the seven-time champions a deserved lead.

And it got even better for the substitute as he netted his hat-trick in the 45th minute. A shot from the right by Nijo Gilbert was saved by a diving Koshy but Jesin was once again on hand to divert the ball home. What an inspired piece of substitution it was as the young star netted thrice in the span of only 15 minutes to completely change the complexion of the game.

Kerala was not done yet. Gilbert’s cross-cum-shot was saved by Koshy but once again, the rebound fell to a Kerala player. This time around, Shighil was on hand to increase Kerala’s lead as they went into the break leading 4-1. 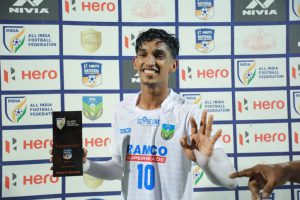 Harsh words must have been spoken by the Karnataka coach as his players started much brighter. Magesh Selva had the chance to reduce the deficit but he just could not sort his feet out as a cross floated in from the right. But Karnataka eventually did pull a goal back in the 54th minute.

Just as the Karnataka players were sensing the chance to mount a comeback, the super sub struck once again. Within two minutes, Kerala once again led by 3 goals. He nicked the ball off the Karnataka defence, ran from the centre circle and then finished with aplomb with his right foot this time.

Within 5 minutes, the home side extended their lead. Arjun Jayaraj made a fine run down the right flank and his cross took a wicked deflection off of Siju and it completely bamboozled Koshy who had no chance.

Credit to the Karnataka players as they kept pushing and they got their reward in the 72nd minute. A rasping long range drive from Solaimalai went through a crowd of players, beyond the fingertips of a diving Midhun as Karnataka reduced the lead by a goal. But that just sparked Jesin into action once again as he went through on goal to score his fifth of the night and Kerala’s seventh.

The match eventually finished 7-3 in favour of the hosts who will be looking to win the competition on home soil and currently look favourites to lift the trophy on Monday. The second semi-final between West Bengal and Manipur is scheduled for Friday (April 29, 2022).