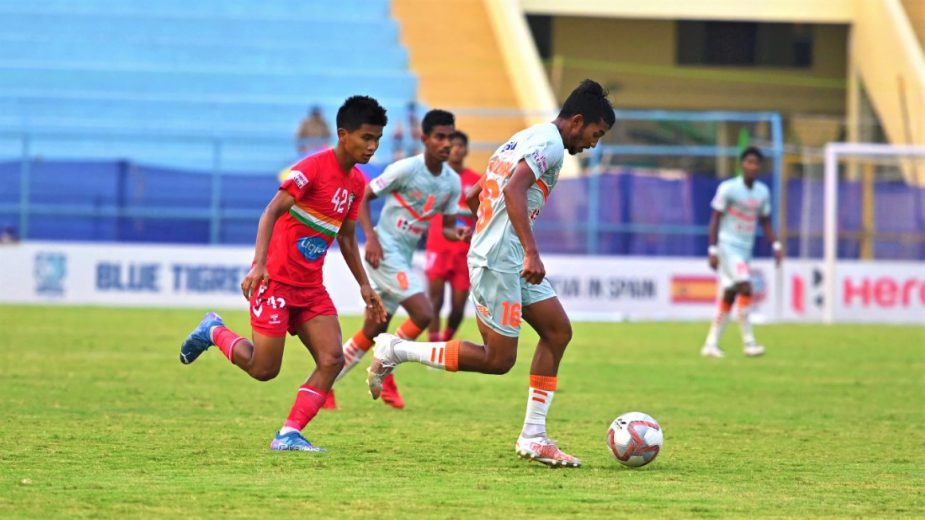 A cagey stalemate handed only a point to Sudeva Delhi and Indian Arrows, here at the Naihati Stadium on Sunday, May 1, 2022. Defenses were on top while the attackers were a tad complacent as neither side was able to break the other down.

An extremely cagey start to the first half ensured neither keeper was tested. Both sides attempted only two shots each, out of which only one for Sudeva was on target. Brijesh Giri was the first to advance and won a freekick on the left flank after his typical sprint was halted unfairly by Sudeva skipper Vanlalzuidika Chhakchhuak. Nothing manifested from the resulting freekick for the Arrows.

At the other end, Sudeva won a freekick right in front of goal, near the edge of the box after Sibajit Singh brought Lawmnasangzuala down. In-form youngster Shubho Paul stood over the ball but he put his effort straight into the Arrows’ wall. The only on-target shot of the half came in the seventeenth minute when William Neihsial cut into the Arrows’ box from the left and saw his near post attempt comfortably saved by Arrows’ keeper Lovepreet Singh.

As the ball stayed in the defensive third and midfield for both sides, freekicks were the only source of threat. Sairuatkima gave away another freekick in a good position and also received a booking near the half-hour mark. Parthib Gogoi scuffed the freekick as it flew high and wide. In the last quarter of the half, Arrows applied the pressure. Vibin Mohanan attempted two promising passes, one to Gogoi and the other to Giri. Both were intercepted as the first half ended goalless.

Arrows were first to roll the dice at halftime as they replaced Vinay Harji with Harsh Patre. However, Sudeva swarmed forward two minutes into the second half. Veer Singh Choudhary whipped in a good ball in as Abhijit Sarkar had to adjust his footing, lean back and almost strike a volley-esque shot at goal. The effort lacked power and was comfortably claimed by the keeper.

Chhakchhuak and Giri came together again in the second half, the latter winning a freekick again, dangerously close to the Sudeva box, but on the left side of goal. Gogoi whipped a powerful shot in but it was blocked and cleared. Seventy minutes into the game, the first real save was made as Sachin Jha’s quick reflexes denied Halen Nongtdu effort from a corner.

A minute after that save, Gogoi struck the crossbar with his header from a Taison Singh cross. The rebound fell to substitute Patre, who astoundingly put his effort on the crossbar too, as Sudeva escaped without a wound.

At the hour mark, Neihsial waltzed into the Arrows box and also managed to get a shot away. The midfielder’s attempt was already curling away from goal as it was deflected behind for a corner. A few minutes later, the Arrows defence had to be on their toes again as Sarkar came pacing down the right but was denied by a brilliantly timed challenge from Sayan Das.

Shaiborlang Kharpan replaced Shubho Paul ten minutes from time. The youngster almost scored with his first attack seconds after coming on. Unfortunately for him, the shot was straight at the keeper. On the counter, Patre unleashed a promising strike that had Sachin Jha at full stretch. However, Patre’s shot flew wide at the near-post.

The game finally picked up momentum in the final quarter of the match. However, it was too late as both sides had to settle for a point. Sudeva had a chance to overtake Aizawl FC in the table and go to the top of the Relegation standings with a win but a draw keeps them one point behind the leaders who have a game in hand. Indian Arrows are three points off Sudeva, level on points with TRAU and Real Kashmir, and still five points clear of the relegation spot.