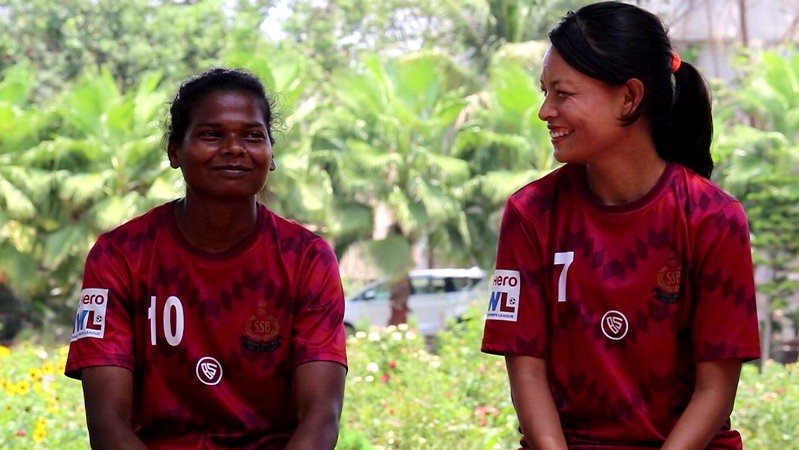 Almost everyone that starts out to play football dreams of playing for the country at some time. One such duo, that is dreaming of making it to the national team on the back of their performances for SSB Women FC in the Hero Indian Women’s League is Dular Marandi and Ranjita Devi.

Having netted five goals for her team, captain Dular Marandi hails from the Dumka district in Jharkhand. The orphaned girl comes with big dreams in her eyes and is trying to showcase her football skills through the Hero IWL.

“I want to play for India someday which is my ultimate goal. I have scored goals but that is my job, if I don’t score then there will be no motivation in the team. I just want to play well and represent India, I have seen players playing with the Indian jersey which aspires me to be a better footballer,” she said.

“I always wanted people to recognize me and my talent and make my name in football that is how football happened to me. My family always supported me but due to lack of money, many of my dreams were shattered”.

While Dular is still accepting the fact of running her family as both of her parents passed away at an early age, she also wants to be recognized by the people for her talent.

“Back home, I don’t have anyone except my brother, both of my parents died when I was young. He has told me to play and concentrate on my game, he will manage the home by working at a local firm,” Dular informed.

The SSB skipper is playing her second season of Hero IWL and has the responsibility of leading lead the team throughout.

“We always focus on our strengths and weakness, which help us in our next game. We support each other in every aspect as we know everyone is working hard to give us the proper facilities to train. We want to utilise those and keep working hard,” she quipped.

Meanwhile, Ranjita Devi, who comes from the Bishnupur district in Manipur, is an asset to the team as she leads from the front.

“I used to watch my seniors play the game, and that is how the interest began. I did not know how to play but still managed to learn. When I was in class three, one fine day my teacher asked me to participate in the grassroots programme, and I immediately said yes. 20 girls were selected in which I went to play. Since the start, my father supported me a lot, which I will never forget,” Ranjita said.

Ranjita, along with Dular, shared her struggles of not having a father to motivate her during her formative years.

“My father expired but whatever I am today, I owe it to him. He always used to tell me to play and perform well and create a name for myself, which I am trying to do,” she said.

While Ranjita had been called up to the Blue Tigresses squad for an International Friendly against Hong Kong and Indonesia in 2019, she couldn’t play because of an injury. She still hopes to represent her country one day.

“I have been in the camp for India, but due to my injury, I couldn’t participate in the matches. I am working hard to fulfil my dream, which is to play for India again,” she expressed with a smile.

Ranjita is playing as a forward in the ongoing season and she shared her experience of playing 4 seasons to date.

“Hero IWL is a life-changing tournament because if we perform well, everyone will notice us, and we will be appreciated and might get a chance to play for India,” she added.

Also Read: God has given us this chance and we want to make the most of it, says Mohammedan SC’s Manoj Mohammad

God has given us this chance and we want to make the most of it, says Mohammedan SC’s Manoj Mohammad
We want to win this league unbeaten: Steven Dias