SSB Women snatched a comeback 3-2 victory over ARA FC in the Hero Indian Women’s League 2021-22 at the 7th Battalion Ground in Bhubaneswar on Thursday, April 28.

The team from Ahmedabad took the lead in the 5th minute itself. Midfielder Kiran found the back of the net with a strike of the highest quality. However, ARA FC’s celebrations were soon cut short as SSB Women struck back only two minutes later. Skipper Dular Marandi made a good connection with the ball off a low cross into the box and turned it into the goal.

The No. 10 had another chance to score, but sent the ball over the goal in the 16th minute as the scoreline remained 1-1. Nevertheless, before the half hour mark, SSB Women made it 2-1, thanks to Sumila Chanu’s superb footwork inside the box. The team from West Bengal took complete charge of the game thereafter as they kept majority of the ball possession. 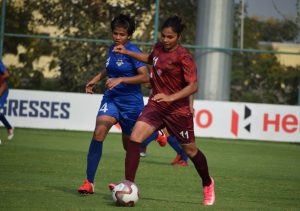 In the 43rd minute, Dular Marandi once again proved her class with a classic dummy to beat an ARA FC defender. She went on to curl the ball into the top left corner and made it 3-1 for SSB Women. Over the next half, Kiran and Sumila Chanu both came close to scoring but couldn’t find the target.

Later in the 81st minute, ARA charged back with their second goal of the game. This time, defender Poonam was the first to react following some confusion between SSB Women defenders and scored off a corner to make it 3-2. Unfortunately, her side settled for the defeat at full time. On the other hand, SSB Women registered their third victory of the Hero IWL campaign.