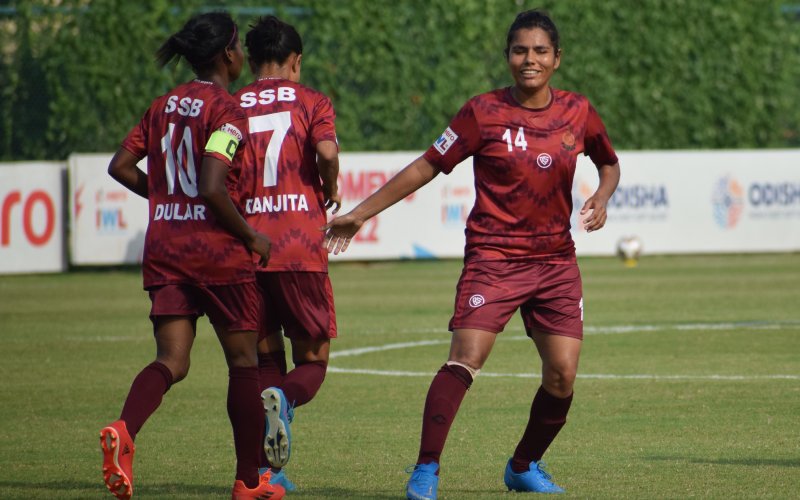 SSB eased past PIFA at the 7th Batallian ground with a 6-1 victory in the Hero Indian Women’s League on Wednesday, May 25, 2022.

SSB got off to a flying start and came very close to scoring their first in the 8th minute. Dular collected a through ball and hit it cleanly, but the shot went just wide of the post. However, they didn’t have to wait long for the opener. Ranjita scored in the 13th minute and provided them with the early lead.

Ranjita once again found herself on the scoresheet in the 28th minute. This time she collected a beautiful ball from Dular from the left flank and slotted the ball home to double their lead.

Sumila’s thunderbolt further increased the miseries for PIFA. Her shot from outside the box hit the top bins as the opponent goalkeeper had no answer. At halftime, SSB led 3-0.

After the breather, SSB scored once again in the 54th minute, as Ranjita completed her hattrick. Sandhiya delivered a perfect corner and the striker headed the ball into the net. The Sandhiya-Ranjita duo caused further misery to the PIFA defence five minutes later when the latter dribbled past two defenders and found the net once more. Trailing 0-5 before the hour mark, the game was all over for PIFA by that time.

PIFA pulled one goal back in the 75th minute. Nisilia found a patch of space inside the box and made no mistake with the ball. The scoreline read 5-1 after the strike.

Monika pounced on a goalkeeper error and restored the 5-goal-lead for SSB in the 80th minute. The game ended 6-1 at the Batallion Ground in favour of SSB. Ranjita won the Hero of the Match award for her 4 goals.