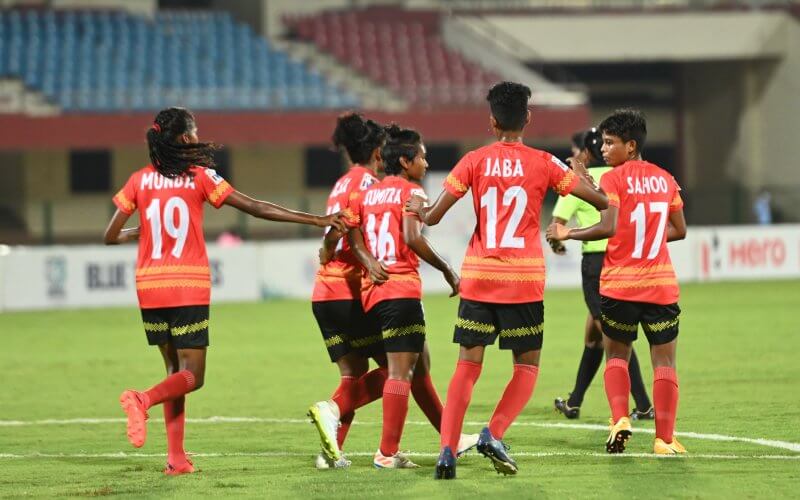 Sports Odisha secured three points in the ongoing Hero Indian Women’s League, earning a 4-1 victory over local rivals Odisha Police at the Kalinga Stadium in Bhubaneswar on Sunday, May 8, 2022. Goals from Sumitra, Satyabati, Pyari and Subhadra were enough to hand them a fourth victory in the league.

Odisha Police skipper Sumitra Xalxo gave her team an unprecedented lead despite Sports Odisha being the favourites on paper. She scored thanks to an exquisite curler into the top corner. However, as the match progressed, Sports Odisha took control. Sumitra Hembram netted the equaliser with a glancing header.

Subsequently, Sports Odisha took the lead courtesy Satyabati Khadia, who pounced on a poor clearance inside the box and tapped it in. Odisha Police were lucky to stay only one goal behind before halftime as Pyari Xaxa made life difficult for their defenders, but could not score a third.

However, the attacker finally got on the scoresheet a minute into the second half. Xaxa showed some individual brilliance to shrug off her marker and place it into the bottom corner to make it a two-goal lead for her side.

A fourth was added three minutes before the hour mark for Sports Odisha by Subhadra Sahoo, who latched on to a loose ball inside the box and finished with precision.

Odisha Police made a late charge to reduce the deficit. Sarojini Tirkey’s shot from inside the box was cleared off the line by Jabamani Tudu of Sports Odisha to keep the three-goal lead intact. Seven minutes were added for stoppages but the game did not see any more goals.