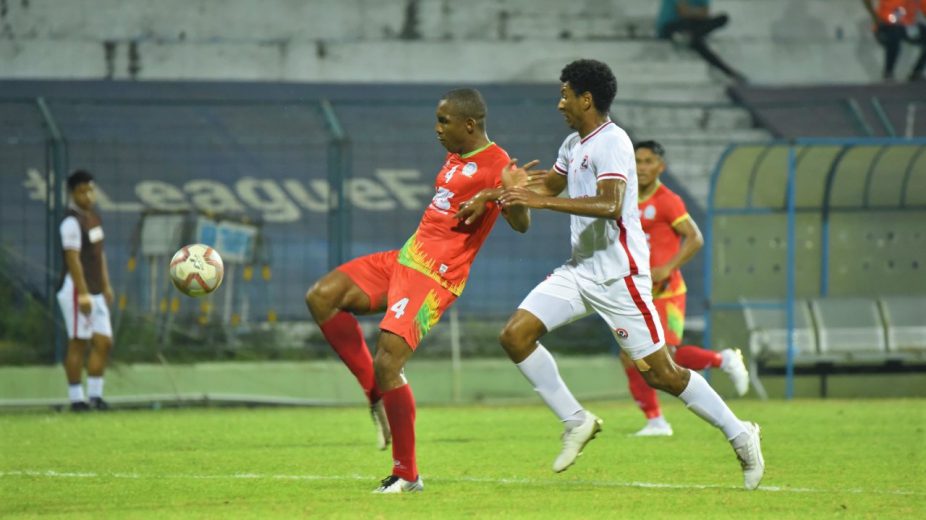 TRAU FC ended their six-game winless run with a convincing 2-0 victory against Aizawl FC in the North-East Derby, here at the Kalyani Stadium. First half goals from Salam Johnson Singh and Helder Lobato for TRAU were enough to sweep Aizawl FC aside and rescue TRAU from the relegation battle.

In the opening five minutes of the game, TRAU applied the pressure, trying to unsettle Aizawl who had fielded a side featuring a few new faces. After dealing with initial attacks, Aizawl moved forward with Ramhlunchhunga down the right flank. The winger dribbled past his marker really well before attempting a knuckle shot at goal and forcing Bishorjit Singh to make a save.

TRAU got their noses in front 13 minutes into the game. Krishnananda Singh came sprinting down the left flank, after being played in by a lofted ball from Milan Singh, and cut it back for Salam Johnson Singh, who was completely unmarked in the box. The striker side-footed the ball past the keeper and the defence perfectly to give his side a crucial lead in the derby.

The front three of Aizawl tried linking up to create an opportunity but were let down by a few poor passes and also by the alert TRAU defence. Fernandinho came close to adding another goal for TRAU from a freekick but his effort sailed over the bar.

Just past the half hour mark, Salam Johnson was presented with a glorious opportunity after he set off on a counter attack.The striker beat Melory Laldinsanga and only had the keeper to beat. With the goal at his mercy, Salam Johnson, astonishingly, put it wide.

Familiar faces returned to the Aizawl team as they walked out for the second half. Dipanda Dicka and Willis Plaza were sent on to salvage something from the game. The substitutes did trouble the TRAU defence but ultimately could not penetrate it.

Three minutes from the hour mark, Salam Johnson was stretchered off and replaced by Khanngam Horam. Minutes after coming on, Horam was involved in a quick move and played Krishnananda through on goal. The shot from Krishnananda was saved by Lalmuansanga. There was chaos in the box, seconds later, as Aizawl defenders were scampering to clear the ball after a barrage of attacks from TRAU.

In the final half hour of the game, TRAU were completely dominant. A plethora of attacks were launched as some were wasted by poor finishing while the others were defended well by Aizawl. Chances fell to Horam, Krishnananda, Fernandinho and Joseph Olaleye. Despite that, the scoreline stayed the same.

TRAU ended their six-game winless run that started after their victory over Aizawl in Phase 1. The win takes them level on points with Sudeva and a point behind Aizawl. They are also out of the relegation fight. Meanwhile, Aizawl cannot extend their lead but stay at the top of the table with a one-point advantage.