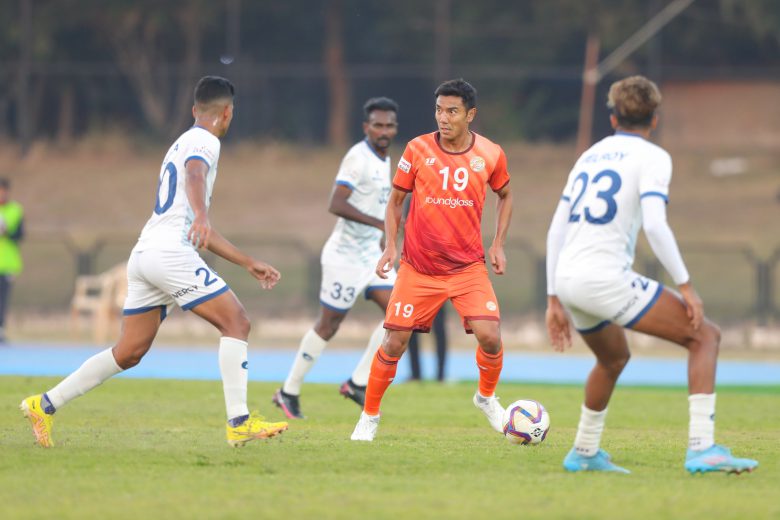 Panchkula, November 23, 2022: RoundGlass Punjab FC (RGPFC) were held on to a draw by Rajasthan United FC (RUFC) courtesy of an injury time equaliser from Gyamar Nikum which denied them a third consecutive win in the 16th Hero I – League played here at the Tau Devi Lal Stadium. Daniel Lalhimpuia had given the lead for RGPFC.

RGPFC started the first half with their usual high press strategy and created pressure in the opposition half. They were looking the livelier in the initial exchanges and soon yielded a result. Daniel Lalhimpuia volleyed beautifully from the edge of the box after a clearance of a corner from Samuel Lalmuanpuia in the 13th minute beating RUFC goalkeeper Md. Rafique Ali Sardar. The rest of the half saw both teams trying to control the game. Rajasthan started to string some attacks but the RGPFC defence stood firm. The best chance came for RUFC when Nuha Marong Krubally’s header of Martin Chaves’s cross went wide.

RUFC had most of the possession in the second half and played the more attacking football keeping the RGPFC defence on their toes. Krishnananda Singh could have doubled RGPFC’s lead but his left footed shot came of the post. RUFC kept on pushing and went on to equalize in the injury time. RGPFC keeper Kiran Limbu spilled a Joseba Beitia cross that fell kindly for substitute Gyamar Nikum who finished expertly to deny RGPFC all three points.

RGPFC have 7 points with this draw from three matches while RUFC have 4 points after playing the same number of matches. Daniel Lalhimpuia was adjudged the Hero of the Match. RGPFC will play their next match against Aizwal FC on 28th November at Tau Devi Lal Stadium, Panchkula.