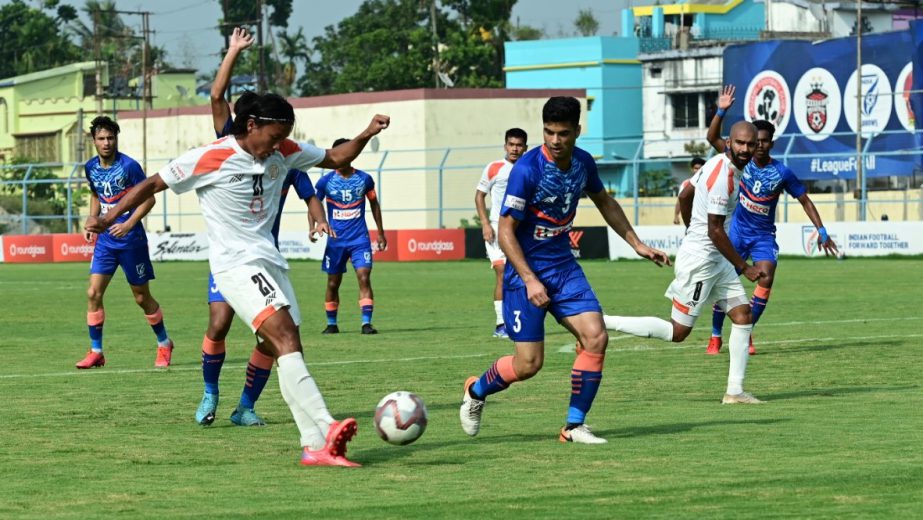 RoundGlass Punjab FC on Wednesday recorded their second successive victory as they defeated Indian Arrows 3-1 in the Hero I-League, here, at the Naihati stadium. With this, RoundGlass have moved to the fourth spot on the table. They are now on par point with Sreenidi Deccan FC with one game in hand.

Kurtis Guthrie Maheson Singh Tongbram and Rupert Nongrum were on the target for RoundGlass while the Indian Arrows got a late consolation through a Jaspreet Singh own goal.

RoundGlass Punjab FC made a strong start to the game, pressing high and looking to generate chances right away. The Indian Arrows’ young talents dug deep as they planned to counterattack their opponents. Kurtis Guthrie attempted a header in the 12th minute after Shankar Sampingiraj set him up with a corner kick, but his shot went over the bar.

Joseba Beita’s free kick in the 16th minute gave them another chance, but the Spanish playmaker’s cross ended up in no-man’s land. Guthrie attempted another shot in the 20th minute but failed in putting it past Indian Arrows goalie Syed Zahid Hussain Bukhari as he made an easy save.

Indian Arrows were handed a blow in the 32nd minute when Velanco Rodrigues replaced an injured Suhail Ahmad Bhat, who was stretched off the ground following a collision with an opposition player.

RoundGlass’ best chance of the first half came in the 36th minute when Maheson Singh Tongbram’s spectacular effort was palmed away by Zahid. Three minutes later, Zahid denied his rivals once again by blocking Guthrie’s attempt. Three extra minutes were added at the end of the first half’s regulation time, but nothing transpired.

The second half of the game started similarly – RoundGlass players creating chances and Zahid blocking their attempts. Just two minutes after the play resumed, Guthrie took a shot from outside the box but it was palmed away for a corner.

Guthrie was finally rewarded for continued efforts in the 51st minute as he opened the scoring with a looping header. Kean Lewis set Guthrie up with a left-foot cross and the attacker made a perfect jump to guide the ball into the net.

Three minutes later, Guthrie provided his first assist through a low cross to Maheson Singh Tongbram, who deposited the ball inside the net with utmost ease.

Harsh Patre had a chance to reduce the lead in the 65th minute but failed in converting the shot after a horrible clearance from RoundGlass goalie Jaspreet Singh.

RoundGlass made two substitutions in the 74th minute as Travis Major went out to make way for Telem Suranjit Singh while Rupert Nongrum replaced Maheson Singh Tongbram. Just 12 minutes after coming on the field, Rupert found the back of the net as RoundGlass increased their lead to three goals.

Satendra Singh Yadav was instrumental in getting a consolation goal for Indian Arrows as his shot came off the post, and rebounded off an unfortunate Jaspreet into the net for the match to end 3-1.