The importance of the fixture had petered away even before the players took to the field, West Bengal’s convincing win over Rajasthan knocking Punjab out of the tournament. Nonetheless Punjab were intent on salvaging pride and letting everyone know their rich legacy in the tournament was intact.

Within forty seconds of kickoff, they had their first crack at goal, Amarpreet Singh running for a long ball from the back, into the Meghalaya box. The forward ran through, but made the angle tough on himself by not taking a first touch, and hit on the volley his shot drifted wide.

That was to be one of very few clear chances in the first half for them as Meghalaya slowly took control of the game, playing elaborate passes and moving forward at pace. In the fifth minute, captain Hardy Cliff had a crack from distance only to see his effort go wide. As the half wore on, Meghalaya’s forwards constantly asked questions of Punjab’s defence, Kynsaibor Lhuid and Shano Tariang at the forefront of most of them.

Some superb wingplay saw Saveme Tariang float a superb cross into the box in the 19th minute of the game, only for Tariang to head wide, despite rising high and meeting the ball perfectly. A few minutes later, Tariang was guilty of another miss, this time played into space by Kynsaibor’s cheeky backheel that took two Punjab defenders out of the game. The forward again, shot high and wide. Meghalaya were getting closer, while Punjab were riding their luck and their defenec’s guile. Both the teams headed into the break locked in a goalless stalemate. 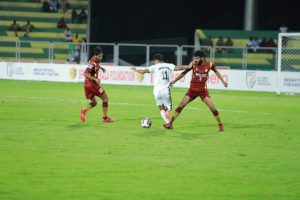 Much like the first half, Punjab came out bursting with energy in the second too. The instructions were clear, hold possession, play through the back and allow Amarpreet space to run into. Within two minutes, they had the lead. After some intricate passing, Indervir Singh dropped deep to pick up the ball near the halfline, looked up and played a perfect pass into space behind Meghalaya’s defence. Amarpreet, had made a well disguised diagonal run towards the box, catching Meghalay’s defence napping, picked up the pass and ran into the box. Amidst shouts pleading him to shoot, he kept calm, almost losing the opportunity to pull the triger. But when he did, five yards from goal he aimed for the far bottom corner, and ensured he scored. Punjab had their lead.

Meghalaya, for all their possession, had a hill to climb to salvage anything from the game. Punjab were, for the most part, happy to let them hold the ball, and kept attacking on the counter to sow confusion and caution in their ranks. Meghalaya could have equalised almost immediately, if their forwards had their shooting boots on. another cross, this time fro the left, drifted between Tariang and the goalkeeper Moses Antony, the latter the winner of the contest.

In the 72nd minute Amarpreet, now bursting with confidence, played Jashandeep Singh through with a beautiful chip from midfield. The forward through clean on goal couldn’t bring the ball under his control and the chance slipped away. In the 75th, the roles were reversed. Jashandeep played Indervir into space on the right and the forward cut a perfect pass back to Amarpreet who just needed to keep his shot on target. He shot high. 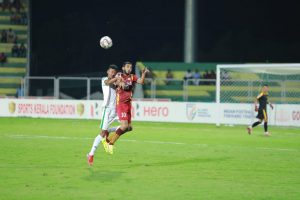 Despite having scored the opener, Amarpreet, with a little more luck and calm could’ve had a hat trick on the night. In the 78th the forward cut in, having collected an inward pass at the top of the box, leaving two defenders in his wake. He shot straight at the gloves of Frolicson Dkhar and the goalkeeper messed up a routine save, letting the ball through his fingers. Fortunately for him, the ball hit the post and drifted out of play.

In the 85th came Meghalaya’s best opportunity of the game, Figo Syndai curling a brilliant freekick from the right corner of the box towards Punjab’s goal. The ball was heading to the top right corner, only for a diving Moses to cme and punch it away. In the process of making the save though, the goalkeeper collided with the post and hurt himself. The injury forced Punjab into a substitution, Harpreet Singh coming on as replacement.

Despite the long amount of injury time, Punjab held on, ending their tournament on a high.