The 2021-22 season of the Hero Indian Women’s League is one that features an extended format where 12 teams fight it out in a round-robin format to determine the champions. There is, however, another new element to the league this season – the Indian Arrows.

“It’s very important that the Indian Arrows women’s team has started to play in the Hero IWL. It’s basically a developmental team for the Senior National Team, something that is essential for the ecosystem,” said Indian Arrows head coach Suren Chettri. 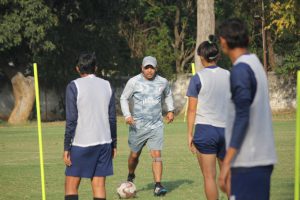 “It will help them get the experience they need to prepare them for international football in the future,” continued Chettri. “The players will get the experience of playing against the best in the country and play against a new opponent every week, which will help them understand how to perform against different kinds of opponents. It will ultimately be good for the players and for the team as well.”

The Arrows are currently occupying the mid-table spot (sixth) on the Hero IWL table, having accumulated four points from three matches so far. While the Arrows squad mostly consist of youngsters, there are those that have had the experience of playing for the Blue Tigresses. Midfielders Priyangka Devi and Martina Thokchom have previously played for the Senior Women’s Team, with the former even scoring her maiden senior international goal against Egypt earlier this month.

“It’s always a positive when you have players with international experience. They pass on that experience to the other girls who are new as well. These players are guiding the others and that’s always good for the team,” Chettri opined. 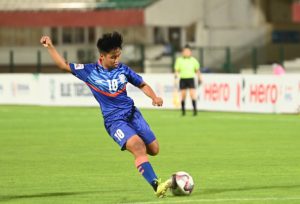 The Indian Arrows project is aimed at building for the future while giving the talented youngsters regular playing time in the domestic league. While the focus on improving the footballing attitude and aptitude of the players remains paramount, the coaching staff at the Indian Arrows is also looking to ensure overall development for the Indian Arrows.

“Few of our girls have also gone for their exams. We need to understand that they are footballers, but studies are also important for their overall development. We cannot just focus on football and neglect academics; both are equally important,” Chettri quipped.

“We are focusing on their progressive development, and at the end of the day, we want these girls to play good progressive football in the future.”