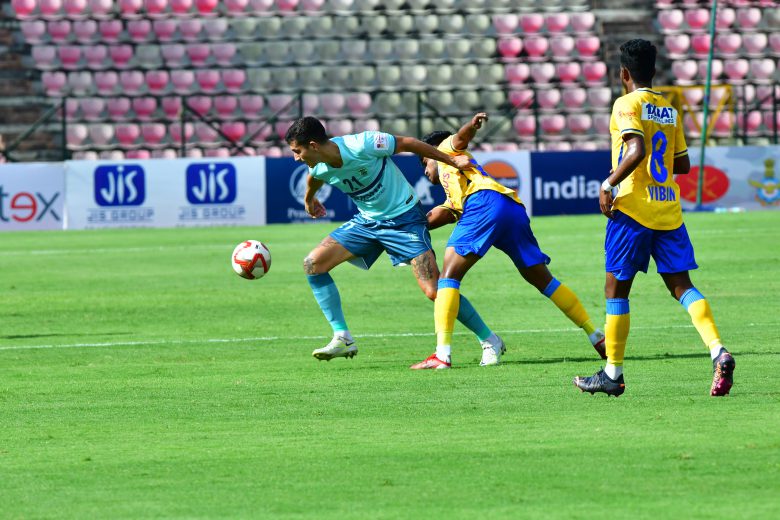 Guwahati, Tuesday, August 23, 2022: Odisha FC (OFC)secured their second win in Group D by
beating the Kerala Blasters 2 – 0 in the 131st Indian Oil Durand Cup here at the Indira Gandhi Athletic
Stadium. They did not have it easy however, against a resilient Blasters side who held them goalless
till half-time through astute tactical defending. OFC’s foreign recruits Diego Mauricio and Saul Pedro
scored for the winners which would be a heartening sign for Spanish coach Josep Gombau.
With this win, OFC go on top of the Group D table with six points from two games, while the Kerala
Blasters have one point from the same number of matches.

All 47 games of the 131st Durand Cup are being telecast LIVE on Sports18 1 SD & HD
and Sports18 Khel as well as live-steamed on the Over the Top (OTT) platform VOOT!

Odisha FC started to dominate possession in the first half once they settled down, after a slow start to
the game by both the sides. The Blasters were compact, held their shape and defended well against the
more experienced OFC side.

Wingbacks Shubham Sarangi and Thoiba Singh Moirangthem played high up the pitch and made
frequent runs through the flanks creating problems for the Blasters defence. The first chance fell to
Jerry, who twice in the previous game, but his shot was straight at the Blasters keeper Sachin Suresh,
who did well and had quite a lot to do.

The best chance of the half came to Issac Vanmalsawma, but his finish was wayward. Nandhakumar
Sekar and Jerry also threatened regularly down the flanks, but the Kerala defence stood firm.

The Kerala Blasters started the second half in a lively manner, but OFC started to control the game and
created the better chances. The forward line linked up well and created pressure inside the Blasters
box.

Second half substitute Diego Mauricio then made an immediate impact after he ran behind the behind
the Blasters defence line and passed right. Issac Vanmalsawma met the ball right about at the centre of
the box and finished smoothly for OFC’s first of the game.

The attacks and chances continued to come and the second goal came from a scramble inside the
Blasters penalty box off a corner taken by Jerry. The ball was headed on target by Australian Osama
Malik, yet another second-half sub and the rebound from the defender was latched on to by Saul Pedro,
who tapped in to double the advantage.

The young Blasters could not stitch any meaningful attacks, enough to trouble the OFC defence, but
even then their performance was commendable against an Odisha side who were coming into the game,
having scored six in their previous encounter.